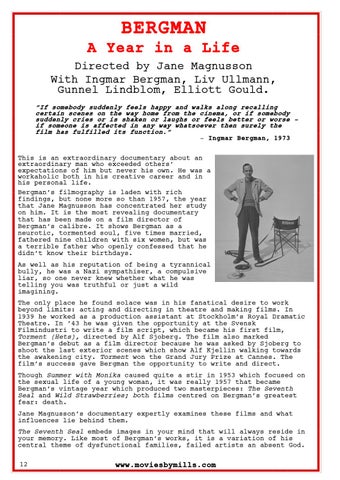 BERGMAN A Year in a Life Directed by Jane Magnusson With Ingmar Bergman, Liv Ullmann, Gunnel Lindblom, Elliott Gould. ”If somebody suddenly feels happy and walks along recalling certain scenes on the way home from the cinema, or if somebody suddenly cries or is shaken or laughs or feels better or worse – if someone is affected in any way whatsoever then surely the film has fulfilled its function.” - Ingmar Bergman, 1973 This is an extraordinary documentary about an extraordinary man who exceeded others’ expectations of him but never his own. He was a workaholic both in his creative career and in his personal life. Bergman’s filmography is laden with rich findings, but none more so than 1957, the year that Jane Magnusson has concentrated her study on him. It is the most revealing documentary that has been made on a film director of Bergman’s calibre. It shows Bergman as a neurotic, tormented soul, five times married, fathered nine children with six women, but was a terrible father who openly confessed that he didn’t know their birthdays. As well as his reputation of being a tyrannical bully, he was a Nazi sympathiser, a compulsive liar, so one never knew whether what he was telling you was truthful or just a wild imagining. The only place he found solace was in his fanatical desire to work beyond limits: acting and directing in theatre and making films. In 1939 he worked as a production assistant at Stockholm’s Royal Dramatic Theatre. In ’43 he was given the opportunity at the Svensk Filmindustri to write a film script, which became his first film, Torment (Hets), directed by Alf Sjoberg. The film also marked Bergman’s debut as a film director because he was asked by Sjoberg to shoot the last exterior scenes which show Alf Kjellin walking towards the awakening city. Torment won the Grand Jury Prize at Cannes. The film’s success gave Bergman the opportunity to write and direct. Though Summer with Monika caused quite a stir in 1953 which focused on the sexual life of a young woman, it was really 1957 that became Bergman’s vintage year which produced two masterpieces: The Seventh Seal and Wild Strawberries; both films centred on Bergman’s greatest fear: death. Jane Magnusson’s documentary expertly examines these films and what influences lie behind them. The Seventh Seal embeds images in your mind that will always reside in your memory. Like most of Bergman’s works, it is a variation of his central theme of dysfunctional families, failed artists an absent God. 12