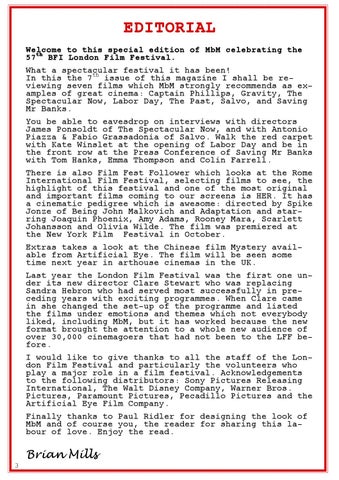 EDITORIAL Welcome to this special edition of MbM celebrating the th 57 BFI London Film Festival. What a spectacular festival it has been! th In this the 7 issue of this magazine I shall be reviewing seven films which MbM strongly recommends as examples of great cinema: Captain Phillips, Gravity, The Spectacular Now, Labor Day, The Past, Salvo, and Saving Mr Banks. You be able to eavesdrop on interviews with directors James Ponsoldt of The Spectacular Now, and with Antonio Piazza &amp; Fabio Grassadonia of Salvo. Walk the red carpet with Kate Winslet at the opening of Labor Day and be in the front row at the Press Conference of Saving Mr Banks with Tom Hanks, Emma Thompson and Colin Farrell. There is also Film Fest Follower which looks at the Rome International Film Festival, selecting films to see, the highlight of this festival and one of the most original and important films coming to our screens is HER. It has a cinematic pedigree which is awesome: directed by Spike Jonze of Being John Malkovich and Adaptation and starring Joaquin Phoenix, Amy Adams, Rooney Mara, Scarlett Johansson and Olivia Wilde. The film was premiered at the New York Film Festival in October. Extras takes a look at the Chinese film Mystery available from Artificial Eye. The film will be seen some time next year in arthouse cinemas in the UK. Last year the London Film Festival was the first one under its new director Clare Stewart who was replacing Sandra Hebron who had served most successfully in preceding years with exciting programmes. When Clare came in she changed the set-up of the programme and listed the films under emotions and themes which not everybody liked, including MbM, but it has worked because the new format brought the attention to a whole new audience of over 30,000 cinemagoers that had not been to the LFF before. I would like to give thanks to all the staff of the London Film Festival and particularly the volunteers who play a major role in a film festival. Acknowledgements to the following distributors: Sony Pictures Releasing International, The Walt Disney Company, Warner Bros. Pictures, Paramount Pictures, Pecadillo Pictures and the Artificial Eye Film Company. Finally thanks to Paul Ridler for designing the look of MbM and of course you, the reader for sharing this labour of love. Enjoy the read.