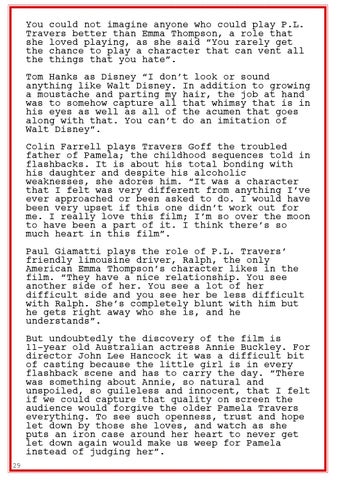 You could not imagine anyone who could play P.L. Travers better than Emma Thompson, a role that she loved playing, as she said “You rarely get the chance to play a character that can vent all the things that you hate”. Tom Hanks as Disney “I don’t look or sound anything like Walt Disney. In addition to growing a moustache and parting my hair, the job at hand was to somehow capture all that whimsy that is in his eyes as well as all of the acumen that goes along with that. You can’t do an imitation of Walt Disney”. Colin Farrell plays Travers Goff the troubled father of Pamela; the childhood sequences told in flashbacks. It is about his total bonding with his daughter and despite his alcoholic weaknesses, she adores him. “It was a character that I felt was very different from anything I’ve ever approached or been asked to do. I would have been very upset if this one didn’t work out for me. I really love this film; I’m so over the moon to have been a part of it. I think there’s so much heart in this film”. Paul Giamatti plays the role of P.L. Travers’ friendly limousine driver, Ralph, the only American Emma Thompson’s character likes in the film. “They have a nice relationship. You see another side of her. You see a lot of her difficult side and you see her be less difficult with Ralph. She’s completely blunt with him but he gets right away who she is, and he understands”. But undoubtedly the discovery of the film is 11-year old Australian actress Annie Buckley. For director John Lee Hancock it was a difficult bit of casting because the little girl is in every flashback scene and has to carry the day. “There was something about Annie, so natural and unspoiled, so guileless and innocent, that I felt if we could capture that quality on screen the audience would forgive the older Pamela Travers everything. To see such openness, trust and hope let down by those she loves, and watch as she puts an iron case around her heart to never get let down again would make us weep for Pamela instead of judging her”. 29