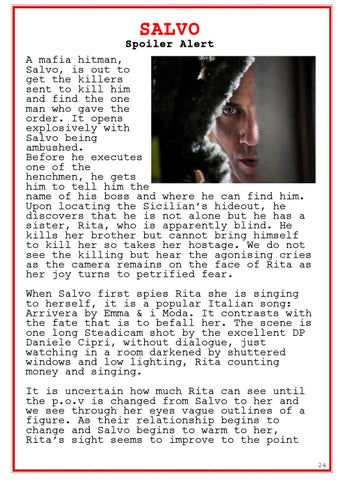 Spoiler Alert A mafia hitman, Salvo, is out to get the killers sent to kill him and find the one man who gave the order. It opens explosively with Salvo being ambushed. Before he executes one of the henchmen, he gets him to tell him the name of his boss and where he can find him. Upon locating the Sicilianâ&amp;#x20AC;&amp;#x2122;s hideout, he discovers that he is not alone but he has a sister, Rita, who is apparently blind. He kills her brother but cannot bring himself to kill her so takes her hostage. We do not see the killing but hear the agonising cries as the camera remains on the face of Rita as her joy turns to petrified fear. When Salvo first spies Rita she is singing to herself, it is a popular Italian song: Arrivera by Emma &amp; i Moda. It contrasts with the fate that is to befall her. The scene is one long Steadicam shot by the excellent DP Daniele Cipri, without dialogue, just watching in a room darkened by shuttered windows and low lighting, Rita counting money and singing. It is uncertain how much Rita can see until the p.o.v is changed from Salvo to her and we see through her eyes vague outlines of a figure. As their relationship begins to change and Salvo begins to warm to her, Ritaâ&amp;#x20AC;&amp;#x2122;s sight seems to improve to the point 24