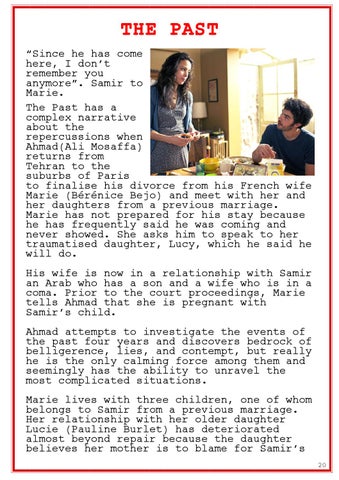 THE PAST “Since he has come here, I don’t remember you anymore”. Samir to Marie. The Past has a complex narrative about the repercussions when Ahmad(Ali Mosaffa) returns from Tehran to the suburbs of Paris to finalise his divorce from his French wife Marie (Bérénice Bejo) and meet with her and her daughters from a previous marriage. Marie has not prepared for his stay because he has frequently said he was coming and never showed. She asks him to speak to her traumatised daughter, Lucy, which he said he will do. His wife is now in a relationship with Samir an Arab who has a son and a wife who is in a coma. Prior to the court proceedings, Marie tells Ahmad that she is pregnant with Samir’s child. Ahmad attempts to investigate the events of the past four years and discovers bedrock of belligerence, lies, and contempt, but really he is the only calming force among them and seemingly has the ability to unravel the most complicated situations. Marie lives with three children, one of whom belongs to Samir from a previous marriage. Her relationship with her older daughter Lucie (Pauline Burlet) has deteriorated almost beyond repair because the daughter believes her mother is to blame for Samir’s 20