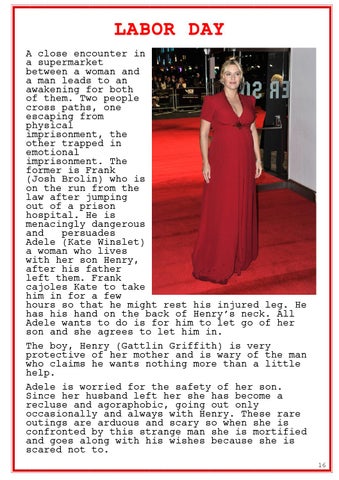 LABOR DAY A close encounter in a supermarket between a woman and a man leads to an awakening for both of them. Two people cross paths, one escaping from physical imprisonment, the other trapped in emotional imprisonment. The former is Frank (Josh Brolin) who is on the run from the law after jumping out of a prison hospital. He is menacingly dangerous and persuades Adele (Kate Winslet) a woman who lives with her son Henry, after his father left them. Frank cajoles Kate to take him in for a few hours so that he might rest his injured leg. He has his hand on the back of Henryâ&amp;#x20AC;&amp;#x2122;s neck. All Adele wants to do is for him to let go of her son and she agrees to let him in. The boy, Henry (Gattlin Griffith) is very protective of her mother and is wary of the man who claims he wants nothing more than a little help. Adele is worried for the safety of her son. Since her husband left her she has become a recluse and agoraphobic, going out only occasionally and always with Henry. These rare outings are arduous and scary so when she is confronted by this strange man she is mortified and goes along with his wishes because she is scared not to. 16