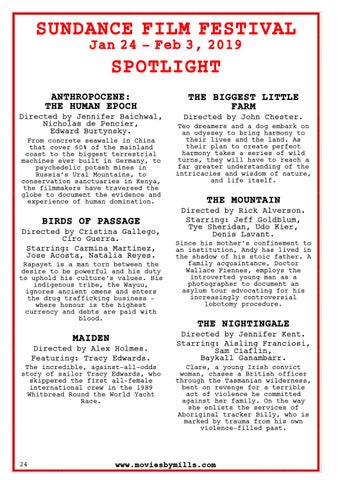 From concrete seawalls in China that cover 60% of the mainland coast to the biggest terrestrial machines ever built in Germany, to psychedelic potash mines in Russia’s Ural Mountains, to conservation sanctuaries in Kenya, the filmmakers have traversed the globe to document the evidence and experience of human domination.

BIRDS OF PASSAGE Directed by Cristina Gallego, Ciro Guerra. Starring: Carmina Martinez, Jose Acosta, Natalia Reyes. Rapayet is a man torn between the desire to be powerful and his duty to uphold his culture’s values. His indigenous tribe, the Wayuu, ignores ancient omens and enters the drug trafficking business – where honour is the highest currency and debts are paid with blood.

Teo dreamers and a dog embark on an odyssey to bring harmony to their lives and the land. As their plan to create perfect harmony takes a series of wild turns, they will have to reach a far greater understanding of the intricacies and wisdom of nature, and life itself.

THE MOUNTAIN Directed by Rick Alverson. Starring: Jeff Goldblum, Tye Sheridan, Udo Kier, Denis Lavant. Since his mother’s confinement to an institution, Andy has lived in the shadow of his stoic father. A family acquaintance, Doctor Wallace Fiennes, employs the introverted young man as a photographer to document an asylum tour advocating for his increasingly controversial lobotomy procedure.

THE NIGHTINGALE Directed by Jennifer Kent. Starring: Aisling Franciosi, Sam Ciaflin, Baykall Ganambarr. Clare, a young Irish convict woman, chases a British officer through the Tasmanian wilderness, bent on revenge for a terrible act of violence he committed against her family. On the way she enlists the services of Aboriginal tracker Billy, who is marked by trauma from his own violence-filled past.

A magazine for discerning cinemagoers and filmmakers. In this Issue. Favourite Films of 2018 Review: The House That Jack Built Favourite Dir...

A magazine for discerning cinemagoers and filmmakers. In this Issue. Favourite Films of 2018 Review: The House That Jack Built Favourite Dir...