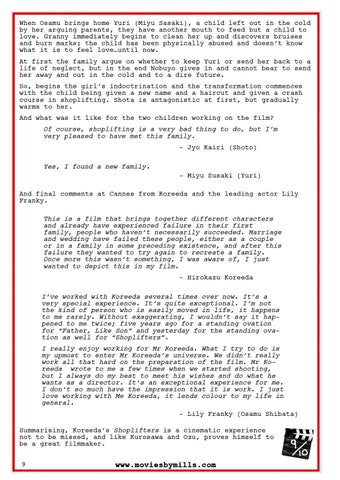 When Osamu brings home Yuri (Miyu Sasaki), a child left out in the cold by her arguing parents, they have another mouth to feed but a child to love. Granny immediately begins to clean her up and discovers bruises and burn marks; the child has been physically abused and doesn’t know what it is to feel love…until now. At first the family argue on whether to keep Yuri or send her back to a life of neglect, but in the end Nobuyo gives in and cannot bear to send her away and out in the cold and to a dire future. So, begins the girl’s indoctrination and the transformation commences with the child being given a new name and a haircut and given a crash course in shoplifting. Shota is antagonistic at first, but gradually warms to her. And what was it like for the two children working on the film? Of course, shoplifting is a very bad thing to do, but I’m very pleased to have met this family. - Jyo Kairi (Shoto) Yes, I found a new family. - Miyu Susaki (Yuri) And final comments at Cannes from Koreeda and the leading actor Lily Franky. This is a film that brings together different characters and already have experienced failure in their first family, people who haven’t necessarily succeeded. Marriage and wedding have failed these people, either as a couple or in a family in some preceding existence, and after this failure they wanted to try again to recreate a family. Once more this wasn’t something, I was aware of, I just wanted to depict this in my film. - Hirokazu Koreeda I’ve worked with Koreeda several times over now. It’s a very special experience. It’s quite exceptional. I’m not the kind of person who is easily moved in life, it happens to me rarely. Without exaggerating, I wouldn’t say it happened to me twice; five years ago for a standing ovation for “Father, Like Son” and yesterday for the standing ovation as well for “Shoplifters”. I really enjoy working for Mr Koreeda. What I try to do is my upmost to enter Mr Koreeda’s universe. We didn’t really work all that hard on the preparation of the film. Mr Koreeda wrote to me a few times when we started shooting, but I always do my best to meet his wishes and do what he wants as a director. It’s an exceptional experience for me. I don’t so much have the impression that it is work. I just love working with Me Koreeda, it lends colour to my life in general. - Lily Franky (Osamu Shibata) Summarising, Koreeda’s Shoplifters is a cinematic experience not to be missed, and like Kurosawa and Ozu, proves himself to be a great filmmaker. 9