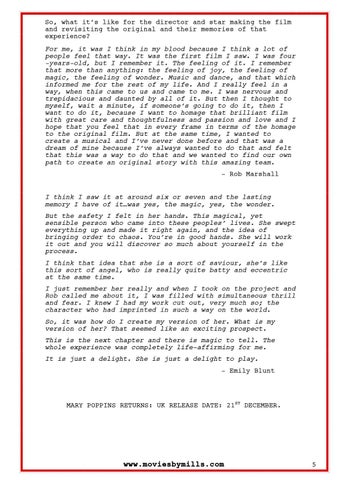 So, what it’s like for the director and star making the film and revisiting the original and their memories of that experience? For me, it was I think in my blood because I think a lot of people feel that way. It was the first film I saw. I was four -years-old, but I remember it. The feeling of it. I remember that more than anything: the feeling of joy, the feeling of magic, the feeling of wonder. Music and dance, and that which informed me for the rest of my life. And I really feel in a way, when this came to us and came to me. I was nervous and trepidacious and daunted by all of it. But then I thought to myself, wait a minute, if someone’s going to do it, then I want to do it, because I want to homage that brilliant film with great care and thoughtfulness and passion and love and I hope that you feel that in every frame in terms of the homage to the original film. But at the same time, I wanted to create a musical and I’ve never done before and that was a dream of mine because I’ve always wanted to do that and felt that this was a way to do that and we wanted to find our own path to create an original story with this amazing team. - Rob Marshall

I think I saw it at around six or seven and the lasting memory I have of it…was yes, the magic, yes, the wonder. But the safety I felt in her hands. This magical, yet sensible person who came into these peoples’ lives. She swept everything up and made it right again, and the idea of bringing order to chaos. You’re in good hands. She will work it out and you will discover so much about yourself in the process. I think that idea that she is a sort of saviour, she’s like this sort of angel, who is really quite batty and eccentric at the same time. I just remember her really and when I took on the project and Rob called me about it, I was filled with simultaneous thrill and fear. I knew I had my work cut out, very much so; the character who had imprinted in such a way on the world. So, it was how do I create my version of her. What is my version of her? That seemed like an exciting prospect.