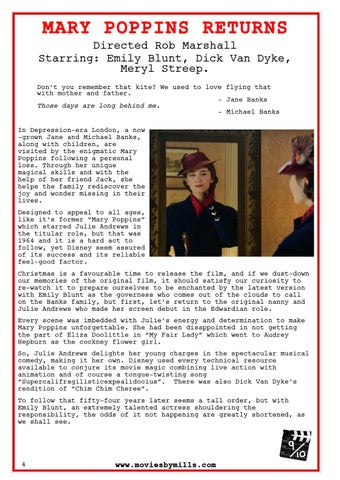 MARY POPPINS RETURNS Directed Rob Marshall Starring: Emily Blunt, Dick Van Dyke, Meryl Streep. Don’t you remember that kite? We used to love flying that with mother and father. - Jane Banks Those days are long behind me. - Michael Banks In Depression-era London, a now -grown Jane and Michael Banks, along with children, are visited by the enigmatic Mary Poppins following a personal loss. Through her unique magical skills and with the help of her friend Jack, she helps the family rediscover the joy and wonder missing in their lives. Designed to appeal to all ages, like it’s former “Mary Poppins” which starred Julie Andrews in the titular role, but that was 1964 and it is a hard act to follow, yet Disney seem assured of its success and its reliable feel-good factor. Christmas is a favourable time to release the film, and if we dust-down our memories of the original film, it should satisfy our curiosity to re-watch it to prepare ourselves to be enchanted by the latest version with Emily Blunt as the governess who comes out of the clouds to call on the Banks family, but first, let’s return to the original nanny and Julie Andrews who made her screen debut in the Edwardian role. Every scene was imbedded with Julie’s energy and determination to make Mary Poppins unforgettable. She had been disappointed in not getting the part of Eliza Doolittle in “My Fair Lady” which went to Audrey Hepburn as the cockney flower girl. So, Julie Andrews delights her young charges in the spectacular musical comedy, making it her own. Disney used every technical resource available to conjure its movie magic combining live action with animation and of course a tongue-twisting song “Supercalifragilisticexpealidocius”. There was also Dick Van Dyke’s rendition of “Chim Chim Cheree”. To follow that fifty-four years later seems a tall order, but with Emily Blunt, an extremely talented actress shouldering the responsibility, the odds of it not happening are greatly shortened, as we shall see.