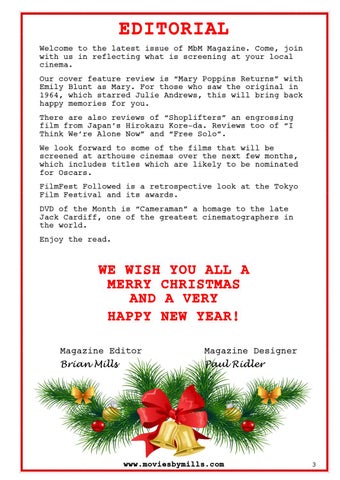 EDITORIAL Welcome to the latest issue of MbM Magazine. Come, join with us in reflecting what is screening at your local cinema. Our cover feature review is “Mary Poppins Returns” with Emily Blunt as Mary. For those who saw the original in 1964, which starred Julie Andrews, this will bring back happy memories for you. There are also reviews of “Shoplifters” an engrossing film from Japan’s Hirokazu Kore-da. Reviews too of “I Think We’re Alone Now” and “Free Solo”. We look forward to some of the films that will be screened at arthouse cinemas over the next few months, which includes titles which are likely to be nominated for Oscars. FilmFest Followed is a retrospective look at the Tokyo Film Festival and its awards. DVD of the Month is “Cameraman” a homage to the late Jack Cardiff, one of the greatest cinematographers in the world.

WE WISH YOU ALL A MERRY CHRISTMAS AND A VERY HAPPY NEW YEAR! Magazine Editor