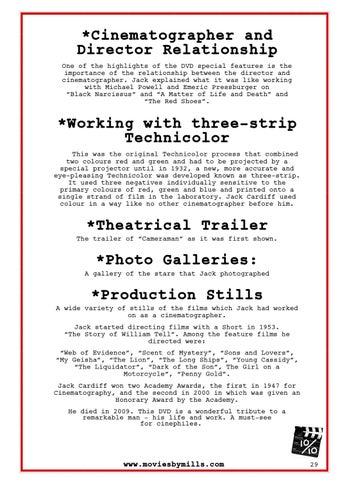 *Cinematographer and Director Relationship One of the highlights of the DVD special features is the importance of the relationship between the director and cinematographer. Jack explained what it was like working with Michael Powell and Emeric Pressburger on “Black Narcissus” and “A Matter of Life and Death” and “The Red Shoes”.

*Working with three-strip Technicolor This was the original Technicolor process that combined two colours red and green and had to be projected by a special projector until in 1932, a new, more accurate and eye-pleasing Technicolor was developed known as three-strip. It used three negatives individually sensitive to the primary colours of red, green and blue and printed onto a single strand of film in the laboratory. Jack Cardiff used colour in a way like no other cinematographer before him.

*Theatrical Trailer The trailer of “Cameraman” as it was first shown.

*Photo Galleries: A gallery of the stars that Jack photographed

*Production Stills A wide variety of stills of the films which Jack had worked on as a cinematographer. Jack started directing films with a Short in 1953. “The Story of William Tell”. Among the feature films he directed were: “Web of Evidence”, “Scent of Mystery”, “Sons and Lovers”, “My Geisha”, “The Lion”, “The Long Ships”, “Young Cassidy”, “The Liquidator”, “Dark of the Son”, The Girl on a Motorcycle”, “Penny Gold”. Jack Cardiff won two Academy Awards, the first in 1947 for Cinematography, and the second in 2000 in which was given an Honorary Award by the Academy. He died in 2009. This DVD is a wonderful tribute to a remarkable man – his life and work. A must-see for cinephiles.