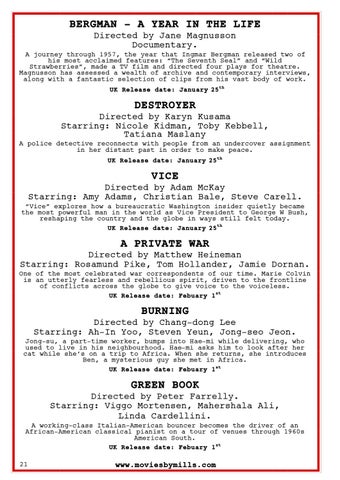 BERGMAN – A YEAR IN THE LIFE Directed by Jane Magnusson Documentary. A journey through 1957, the year that Ingmar Bergman released two of his most acclaimed features: “The Seventh Seal” and “Wild Strawberries”, made a TV film and directed four plays for theatre. Magnusson has assessed a wealth of archive and contemporary interviews, along with a fantastic selection of clips from his vast body of work. UK Release date: January 25th

A PRIVATE WAR Directed by Matthew Heineman Starring: Rosamund Pike, Tom Hollander, Jamie Dornan. One of the most celebrated war correspondents of our time. Marie Colvin is an utterly fearless and rebellious spirit, driven to the frontline of conflicts across the globe to give voice to the voiceless. UK Release date: Febuary 1st

BURNING Directed by Chang-dong Lee Starring: Ah-In Yoo, Steven Yeun, Jong-seo Jeon. Jong-su, a part-time worker, bumps into Hae-mi while delivering, who used to live in his neighbourhood. Hae-mi asks him to look after her cat while she’s on a trip to Africa. When she returns, she introduces Ben, a mysterious guy she met in Africa. UK Release date: Febuary 1st