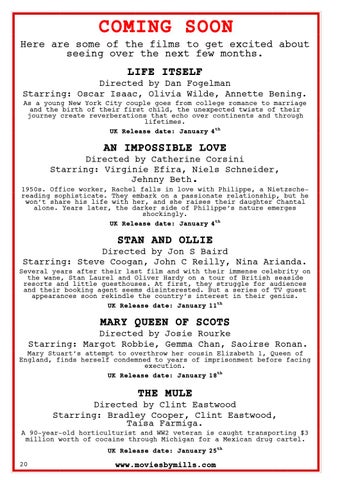 COMING SOON Here are some of the films to get excited about seeing over the next few months.

LIFE ITSELF Directed by Dan Fogelman Starring: Oscar Isaac, Olivia Wilde, Annette Bening. As a young New York City couple goes from college romance to marriage and the birth of their first child, the unexpected twists of their journey create reverberations that echo over continents and through lifetimes. UK Release date: January 4th

AN IMPOSSIBLE LOVE Directed by Catherine Corsini Starring: Virginie Efira, Niels Schneider, Jehnny Beth. 1950s. Office worker, Rachel falls in love with Philippe, a Nietzschereading sophisticate. They embark on a passionate relationship, but he won’t share his life with her, and she raises their daughter Chantal alone. Years later, the darker side of Philippe’s nature emerges shockingly. UK Release date: January 4th

STAN AND OLLIE Directed by Jon S Baird Starring: Steve Coogan, John C Reilly, Nina Arianda. Several years after their last film and with their immense celebrity on the wane, Stan Laurel and Oliver Hardy on a tour of British seaside resorts and little guesthouses. At first, they struggle for audiences and their booking agent seems disinterested. But a series of TV guest appearances soon rekindle the country’s interest in their genius. UK Release date: January 11th