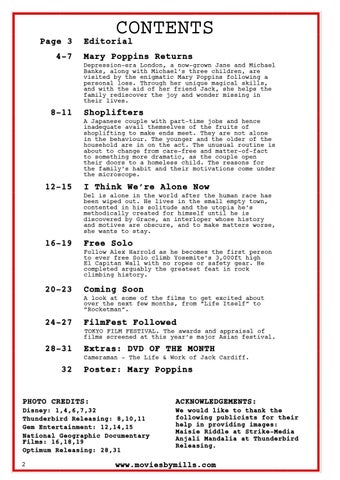 Editorial Mary Poppins Returns Depression-era London, a now-grown Jane and Michael Banks, along with Michael’s three children, are visited by the enigmatic Mary Poppins following a personal loss. Through her unique magical skills, and with the aid of her friend Jack, she helps the family rediscover the joy and wonder missing in their lives.

Shoplifters A Japanese couple with part-time jobs and hence inadequate avail themselves of the fruits of shoplifting to make ends meet. They are not alone in the behaviour. The younger and the older of the household are in on the act. The unusual routine is about to change from care-free and matter-of-fact to something more dramatic, as the couple open their doors to a homeless child. The reasons for the family’s habit and their motivations come under the microscope.

I Think We’re Alone Now Del is alone in the world after the human race has been wiped out. He lives in the small empty town, contented in his solitude and the utopia he’s methodically created for himself until he is discovered by Grace, an interloper whose history and motives are obscure, and to make matters worse, she wants to stay.

Coming Soon A look at some of the films to get excited about over the next few months, from “Life Itself” to “Rocketman”.

Extras: DVD OF THE MONTH Cameraman – The Life & Work of Jack Cardiff.

We would like to thank the following publicists for their help in providing images: Maisie Riddle at Strike-Media Anjali Mandalia at Thunderbird Releasing.