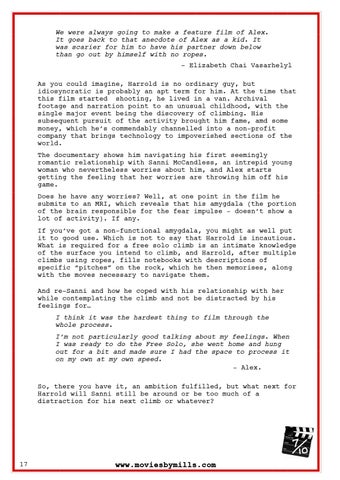 We were always going to make a feature film of Alex. It goes back to that anecdote of Alex as a kid. It was scarier for him to have his partner down below than go out by himself with no ropes. - Elizabeth Chai Vasarhelyl As you could imagine, Harrold is no ordinary guy, but idiosyncratic is probably an apt term for him. At the time that this film started shooting, he lived in a van. Archival footage and narration point to an unusual childhood, with the single major event being the discovery of climbing. His subsequent pursuit of the activity brought him fame, amd some money, which he’s commendably channelled into a non-profit company that brings technology to impoverished sections of the world. The documentary shows him navigating his first seemingly romantic relationship with Sanni McCandless, an intrepid young woman who nevertheless worries about him, and Alex starts getting the feeling that her worries are throwing him off his game. Does he have any worries? Well, at one point in the film he submits to an MRI, which reveals that his amygdala (the portion of the brain responsible for the fear impulse – doesn’t show a lot of activity). If any. If you’ve got a non-functional amygdala, you might as well put it to good use. Which is not to say that Harrold is incautious. What is required for a free solo climb is an intimate knowledge of the surface you intend to climb, and Harrold, after multiple climbs using ropes, fills notebooks with descriptions of specific “pitches” on the rock, which he then memorises, along with the moves necessary to navigate them. And re-Sanni and how he coped with his relationship with her while contemplating the climb and not be distracted by his feelings for… I think it was the hardest thing to film through the whole process. I’m not particularly good talking about my feelings. When I was ready to do the Free Solo, she went home and hung out for a bit and made sure I had the space to process it on my own at my own speed. - Alex. So, there you have it, an ambition fulfilled, but what next for Harrold will Sanni still be around or be too much of a distraction for his next climb or whatever?