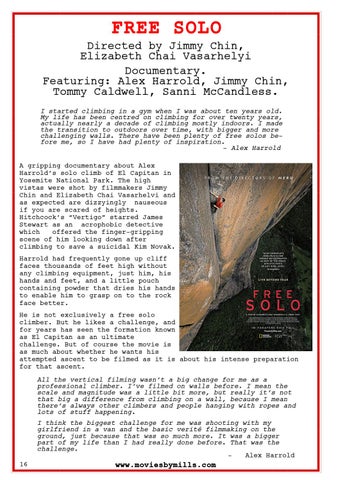 FREE SOLO Directed by Jimmy Chin, Elizabeth Chai Vasarhelyi Documentary. Featuring: Alex Harrold, Jimmy Chin, Tommy Caldwell, Sanni McCandless. I started climbing in a gym when I was about ten years old. My life has been centred on climbing for over twenty years, actually nearly a decade of climbing mostly indoors. I made the transition to outdoors over time, with bigger and more challenging walls. There have been plenty of free solos before me, so I have had plenty of inspiration. - Alex Harrold A gripping documentary about Alex Harrold’s solo climb of El Capitan in Yosemite National Park. The high vistas were shot by filmmakers Jimmy Chin and Elizabeth Chai Vasarhelvi and as expected are dizzyingly nauseous if you are scared of heights. Hitchcock’s “Vertigo” starred James Stewart as an acrophobic detective which offered the finger-gripping scene of him looking down after climbing to save a suicidal Kim Novak. Harrold had frequently gone up cliff faces thousands of feet high without any climbing equipment, just him, his hands and feet, and a little pouch containing powder that dries his hands to enable him to grasp on to the rock face better. He is not exclusively a free solo climber. But he likes a challenge, and for years has seen the formation known as El Capitan as an ultimate challenge. But of course the movie is as much about whether he wants his attempted ascent to be filmed as it is about his intense preparation for that ascent. All the vertical filming wasn’t a big change for me as a professional climber. I’ve filmed on walls before. I mean the scale and magnitude was a little bit more, but really it’s not that big a difference from climbing on a wall, because I mean there’s always other climbers and people hanging with ropes and lots of stuff happening. I think the biggest challenge for me was shooting with my girlfriend in a van and the basic verité filmmaking on the ground, just because that was so much more. It was a bigger part of my life than I had really done before. That was the challenge. Alex Harrold 16