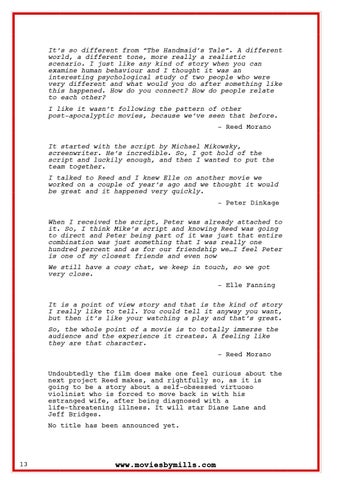 It’s so different from “The Handmaid’s Tale”. A different world, a different tone, more really a realistic scenario. I just like any kind of story when you can examine human behaviour and I thought it was an interesting psychological study of two people who were very different and what would you do after something like this happened. How do you connect? How do people relate to each other? I like it wasn’t following the pattern of other post-apocalyptic movies, because we’ve seen that before. - Reed Morano It started with the script by Michael Mikowsky, screenwriter. He’s incredible. So, I got hold of the script and luckily enough, and then I wanted to put the team together. I talked to Reed and I knew Elle on another movie we worked on a couple of year’s ago and we thought it would be great and it happened very quickly. - Peter Dinkage When I received the script, Peter was already attached to it. So, I think Mike’s script and knowing Reed was going to direct and Peter being part of it was just that entire combination was just something that I was really one hundred percent and as for our friendship we…I feel Peter is one of my closest friends and even now We still have a cosy chat, we keep in touch, so we got very close. - Elle Fanning It is a point of view story and that is the kind of story I really like to tell. You could tell it anyway you want, but then it’s like your watching a play and that’s great. So, the whole point of a movie is to totally immerse the audience and the experience it creates. A feeling like they are that character. - Reed Morano Undoubtedly the film does make one feel curious about the next project Reed makes, and rightfully so, as it is going to be a story about a self-obsessed virtuoso violinist who is forced to move back in with his estranged wife, after being diagnosed with a life-threatening illness. It will star Diane Lane and Jeff Bridges. No title has been announced yet.