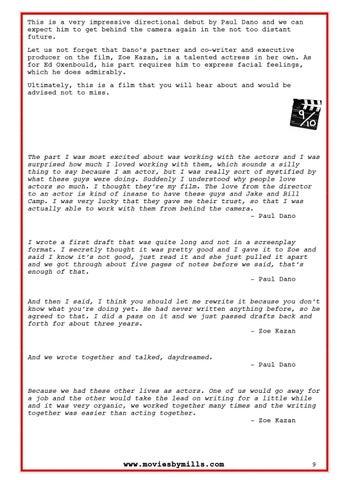 This is a very impressive directional debut by Paul Dano and we can expect him to get behind the camera again in the not too distant future. Let us not forget that Dano’s partner and co-writer and executive producer on the film, Zoe Kazan, is a talented actress in her own. As for Ed Oxenbould, his part requires him to express facial feelings, which he does admirably. Ultimately, this is a film that you will hear about and would be advised not to miss.

The part I was most excited about was working with the actors and I was surprised how much I loved working with them, which sounds a silly thing to say because I am actor, but I was really sort of mystified by what these guys were doing. Suddenly I understood why people love actors so much. I thought they’re my film. The love from the director to an actor is kind of insane to have these guys and Jake and Bill Camp. I was very lucky that they gave me their trust, so that I was actually able to work with them from behind the camera. - Paul Dano

I wrote a first draft that was quite long and not in a screenplay format. I secretly thought it was pretty good and I gave it to Zoe and said I know it’s not good, just read it and she just pulled it apart and we got through about five pages of notes before we said, that’s enough of that. - Paul Dano And then I said, I think you should let me rewrite it because you don’t know what you’re doing yet. He had never written anything before, so he agreed to that. I did a pass on it and we just passed drafts back and forth for about three years. - Zoe Kazan

And we wrote together and talked, daydreamed. - Paul Dano

Because we had these other lives as actors. One of us would go away for a job and the other would take the lead on writing for a little while and it was very organic, we worked together many times and the writing together was easier than acting together. - Zoe Kazan