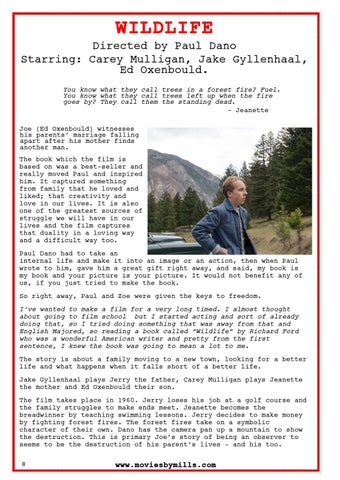 WILDLIFE Directed by Paul Dano Starring: Carey Mulligan, Jake Gyllenhaal, Ed Oxenbould. You know what they call trees in a forest fire? Fuel. You know what they call trees left up when the fire goes by? They call them the standing dead. - Jeanette Joe (Ed Oxenbould) witnesses his parents’ marriage falling apart after his mother finds another man. The book which the film is based on was a best-seller and really moved Paul and inspired him. It captured something from family that he loved and liked; that creativity and love in our lives. It is also one of the greatest sources of struggle we will have in our lives and the film captures that duality in a loving way and a difficult way too. Paul Dano had to take an internal life and make it into an image or an action, then when Paul wrote to him, gave him a great gift right away, and said, my book is my book and your picture is your picture. It would not benefit any of us, if you just tried to make the book. So right away, Paul and Zoe were given the keys to freedom. I’ve wanted to make a film for a very long timed. I almost thought about going to film school but I started acting and sort of already doing that, so I tried doing something that was away from that and English Majored, so reading a book called “Wildlife” by Richard Ford who was a wonderful American writer and pretty from the first sentence, I knew the book was going to mean a lot to me. The story is about a family moving to a new town, looking for a better life and what happens when it falls short of a better life. Jake Gyllenhaal plays Jerry the father, Carey Mulligan plays Jeanette the mother and Ed Oxenbould their son. The film takes place in 1960. Jerry loses his job at a golf course and the family struggles to make ends meet. Jeanette becomes the breadwinner by teaching swimming lessons. Jerry decides to make money by fighting forest fires. The forest fires take on a symbolic character of their own. Dano has the camera pan up a mountain to show the destruction. This is primary Joe’s story of being an observer to seems to be the destruction of his parent’s lives – and his too. 8