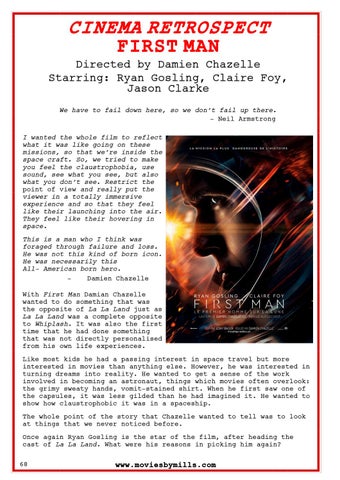 Directed by Damien Chazelle Starring: Ryan Gosling, Claire Foy, Jason Clarke We have to fail down here, so we don’t fail up there. - Neil Armstrong

I wanted the whole film to reflect what it was like going on these missions, so that we’re inside the space craft. So, we tried to make you feel the claustrophobia, use sound, see what you see, but also what you don’t see. Restrict the point of view and really put the viewer in a totally immersive experience and so that they feel like their launching into the air. They feel like their hovering in space. This is a man who I think was foraged through failure and loss. He was not this kind of born icon. He was necessarily this All- American born hero. Damien Chazelle With First Man Damian Chazelle wanted to do something that was the opposite of La La Land just as La La Land was a complete opposite to Whiplash. It was also the first time that he had done something that was not directly personalised from his own life experiences. Like most kids he had a passing interest in space travel but more interested in movies than anything else. However, he was interested in turning dreams into reality. He wanted to get a sense of the work involved in becoming an astronaut, things which movies often overlook: the grimy sweaty hands, vomit-stained shirt. When he first saw one of the capsules, it was less gilded than he had imagined it. He wanted to show how claustrophobic it was in a spaceship. The whole point of the story that Chazelle wanted to tell was to look at things that we never noticed before.

Once again Ryan Gosling is the star of the film, after heading the cast of La La Land. What were his reasons in picking him again? 68