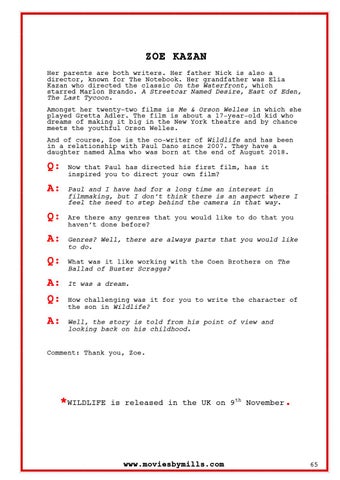 ZOE KAZAN Her parents are both writers. Her father Nick is also a director, known for The Notebook. Her grandfather was Elia Kazan who directed the classic On the Waterfront, which starred Marlon Brando. A Streetcar Named Desire, East of Eden, The Last Tycoon. Amongst her twenty-two films is Me &amp; Orson Welles in which she played Gretta Adler. The film is about a 17-year-old kid who dreams of making it big in the New York theatre and by chance meets the youthful Orson Welles.

And of course, Zoe is the co-writer of Wildlife and has been in a relationship with Paul Dano since 2007. They have a daughter named Alma who was born at the end of August 2018.

Now that Paul has directed his first film, has it inspired you to direct your own film?

Paul and I have had for a long time an interest in filmmaking, but I donâ&amp;#x20AC;&amp;#x2122;t think there is an aspect where I feel the need to step behind the camera in that way.

Are there any genres that you would like to do that you havenâ&amp;#x20AC;&amp;#x2122;t done before?

Genres? Well, there are always parts that you would like to do.

What was it like working with the Coen Brothers on The Ballad of Buster Scraggs?

It was a dream.

Well, the story is told from his point of view and looking back on his childhood.

How challenging was it for you to write the character of the son in Wildlife?

is released in the UK on 9th November.