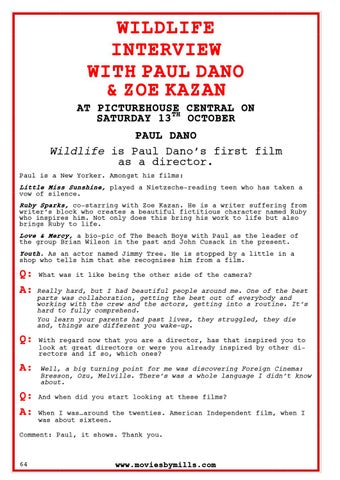 Little Miss Sunshine, played a Nietzsche-reading teen who has taken a vow of silence.

Ruby Sparks, co-starring with Zoe Kazan. He is a writer suffering from writer’s block who creates a beautiful fictitious character named Ruby who inspires him. Not only does this bring his work to life but also brings Ruby to life.

Love &amp; Mercy, a bio-pic of The Beach Boys with Paul as the leader of the group Brian Wilson in the past and John Cusack in the present. Youth. As an actor named Jimmy Tree. He is stopped by a little in a shop who tells him that she recognises him from a film.

What was it like being the other side of the camera? Really hard, but I had beautiful people around me. One of the best parts was collaboration, getting the best out of everybody and working with the crew and the actors, getting into a routine. It’s hard to fully comprehend. You learn your parents had past lives, they struggled, they die and, things are different you wake-up.

With regard now that you are a director, has that inspired you to look at great directors or were you already inspired by other directors and if so, which ones?

Well, a big turning point for me was discovering Foreign Cinema: Bresson, Ozu, Melville. There’s was a whole language I didn’t know about.

And when did you start looking at these films? When I was…around the twenties. American Independent film, when I was about sixteen.