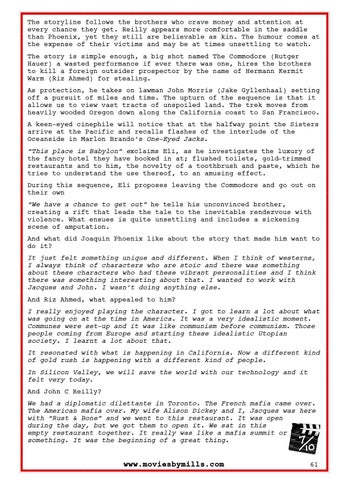 The storyline follows the brothers who crave money and attention at every chance they get. Reilly appears more comfortable in the saddle than Phoenix, yet they still are believable as kin. The humour comes at the expense of their victims and may be at times unsettling to watch. The story is simple enough, a big shot named The Commodore (Rutger Hauer) a wasted performance if ever there was one, hires the brothers to kill a foreign outsider prospector by the name of Hermann Kermit Warm (Riz Ahmed) for stealing. As protection, he takes on lawman John Morris (Jake Gyllenhaal) setting off a pursuit of miles and time. The upturn of the sequence is that it allows us to view vast tracts of unspoiled land. The trek moves from heavily wooded Oregon down along the California coast to San Francisco. A keen-eyed cinephile will notice that at the halfway point the Sisters arrive at the Pacific and recalls flashes of the interlude of the Oceanside in Marlon Brando’s One-Eyed Jacks. “This place is Babylon” exclaims Eli, as he investigates the luxury of the fancy hotel they have booked in at; flushed toilets, gold-trimmed restaurants and to him, the novelty of a toothbrush and paste, which he tries to understand the use thereof, to an amusing effect. During this sequence, Eli proposes leaving the Commodore and go out on their own “We have a chance to get out” he tells his unconvinced brother, creating a rift that leads the tale to the inevitable rendezvous with violence. What ensues is quite unsettling and includes a sickening scene of amputation.

And what did Joaquin Phoenix like about the story that made him want to do it? It just felt something unique and different. When I think of westerns, I always think of characters who are stoic and there was something about these characters who had these vibrant personalities and I think there was something interesting about that. I wanted to work with Jacques and John. I wasn’t doing anything else. And Riz Ahmed, what appealed to him? I really enjoyed playing the character. I got to learn a lot about what was going on at the time in America. It was a very idealistic moment. Communes were set-up and it was like communism before communism. Those people coming from Europe and starting these idealistic Utopian society. I learnt a lot about that. It resonated with what is happening in California. Now a different kind of gold rush is happening with a different kind of people. In Silicon Valley, we will save the world with our technology and it felt very today. And John C Reilly? We had a diplomatic dilettante in Toronto. The French The American mafia over. My wife Alison Dickey and I, with “Rust &amp; Bone” and we went to this restaurant. It during the day, but we got them to open it. We sat in empty restaurant together. It really was like a mafia something. It was the beginning of a great thing.

mafia came over. Jacques was here was open this summit or