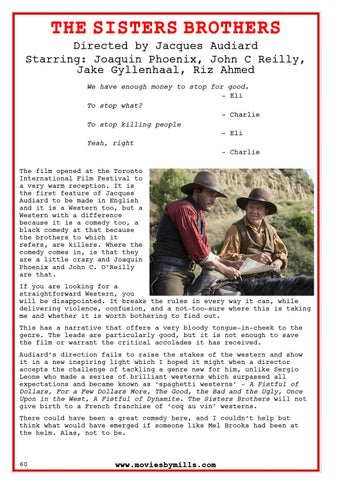 THE SISTERS BROTHERS Directed by Jacques Audiard Starring: Joaquin Phoenix, John C Reilly, Jake Gyllenhaal, Riz Ahmed We have enough money to stop for good. - Eli To stop what? - Charlie To stop killing people - Eli Yeah, right - Charlie The film opened at the Toronto International Film Festival to a very warm reception. It is the first feature of Jacques Audiard to be made in English and it is a Western too, but a Western with a difference because it is a comedy too, a black comedy at that because the brothers to which it refers, are killers. Where the comedy comes in, is that they are a little crazy and Joaquin Phoenix and John C. O’Reilly are that. If you are looking for a straightforward Western, you will be disappointed. It breaks the rules in every way it can, while delivering violence, confusion, and a not-too-sure where this is taking me and whether it is worth bothering to find out. This has a narrative that offers a very bloody tongue-in-cheek to the genre. The leads are particularly good, but it is not enough to save the film or warrant the critical accolades it has received. Audiard’s direction fails to raise the stakes of the western and show it in a new inspiring light which I hoped it might when a director accepts the challenge of tackling a genre new for him, unlike Sergio Leone who made a series of brilliant westerns which surpassed all expectations and became known as ‘spaghetti westerns’ – A Fistful of Dollars, For a Few Dollars More, The Good, the Bad and the Ugly, Once Upon in the West, A Fistful of Dynamite. The Sisters Brothers will not give birth to a French franchise of ‘coq au vin’ westerns. There could have been a great comedy here, and I couldn’t help but think what would have emerged if someone like Mel Brooks had been at the helm. Alas, not to be.