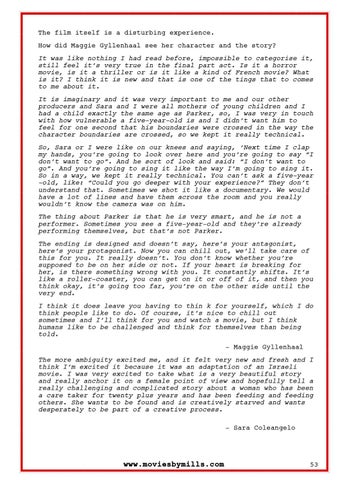 The film itself is a disturbing experience. How did Maggie Gyllenhaal see her character and the story? It was like nothing I had read before, impossible to categorise it, still feel it’s very true in the final part act. Is it a horror movie, is it a thriller or is it like a kind of French movie? What is it? I think it is new and that is one of the tings that to comes to me about it. It is imaginary and it was very important to me and our other producers and Sara and I were all mothers of young children and I had a child exactly the same age as Parker, so, I was very in touch with how vulnerable a five-year-old is and I didn’t want him to feel for one second that his boundaries were crossed in the way the character boundaries are crossed, so we kept it really technical. So, Sara or I were like on our knees and saying, ‘Next time I clap my hands, you’re going to look over here and you’re going to say “I don’t want to go”. And he sort of look and said: “I don’t want to go”. And you’re going to sing it like the way I’m going to sing it. So in a way, we kept it really technical. You can’t ask a five-year -old, like: “Could you go deeper with your experience?” They don’t understand that. Sometimes we shot it like a documentary. We would have a lot of lines and have them across the room and you really wouldn’t know the camera was on him. The thing about Parker is that he is very smart, and he is not a performer. Sometimes you see a five-year-old and they’re already performing themselves, but that’s not Parker. The ending is designed and doesn’t say, here’s your antagonist, here’s your protagonist. Now you can chill out, we’ll take care of this for you. It really doesn’t. You don’t know whether you’re supposed to be on her side or not. If your heart is breaking for her, is there something wrong with you. It constantly shifts. It’s like a roller-coaster, you can get on it or off of it, and then you think okay, it’s going too far, you’re on the other side until the very end. I think it does leave you having to thin k for yourself, which I do think people like to do. Of course, it’s nice to chill out sometimes and I’ll think for you and watch a movie, but I think humans like to be challenged and think for themselves than being told. - Maggie Gyllenhaal The more ambiguity excited me, and it felt very new and fresh and I think I’m excited it because it was an adaptation of an Israeli movie. I was very excited to take what is a very beautiful story and really anchor it on a female point of view and hopefully tell a really challenging and complicated story about a woman who has been a care taker for twenty plus years and has been feeding and feeding others. She wants to be found and is creatively starved and wants desperately to be part of a creative process. - Sara Coleangelo