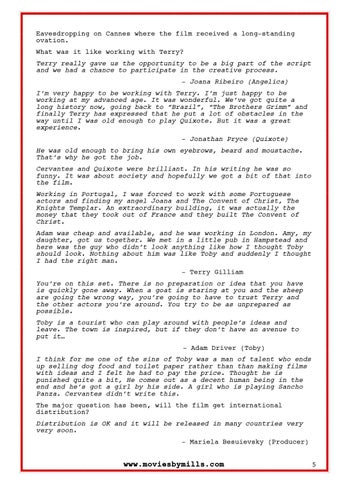 Eavesdropping on Cannes where the film received a long-standing ovation. What was it like working with Terry? Terry really gave us the opportunity to be a big part of the script and we had a chance to participate in the creative process. - Joana Ribeiro (Angelica) I’m very happy to be working with Terry. I’m just happy to be working at my advanced age. It was wonderful. We’ve got quite a long history now, going back to “Brazil”, “The Brothers Grimm” and finally Terry has expressed that he put a lot of obstacles in the way until I was old enough to play Quixote. But it was a great experience.

- Jonathan Pryce (Quixote) He was old enough to bring his own eyebrows, beard and moustache. That’s why he got the job. Cervantes and Quixote were brilliant. In his writing he was so funny. It was about society and hopefully we got a bit of that into the film. Working in Portugal, I was forced to work with some Portuguese actors and finding my angel Joana and The Convent of Christ, The Knights Templar. An extraordinary building, it was actually the money that they took out of France and they built The Convent of Christ. Adam was cheap and available, and he was working in London. Amy, my daughter, got us together. We met in a little pub in Hampstead and here was the guy who didn’t look anything like how I thought Toby should look. Nothing about him was like Toby and suddenly I thought I had the right man. - Terry Gilliam You’re on this set. There is no preparation or idea that you have is quickly gone away. When a goat is staring at you and the sheep are going the wrong way, you’re going to have to trust Terry and the other actors you’re around. You try to be as unprepared as possible. Toby is a tourist who can play around with people’s ideas and leave. The town is inspired, but if they don’t have an avenue to put it… - Adam Driver (Toby) I think for me one of the sins of Toby was a man of talent who ends up selling dog food and toilet paper rather than than making films with ideas and I felt he had to pay the price. Thought he is punished quite a bit, He comes out as a decent human being in the end and he’s got a girl by his side. A girl who is playing Sancho Panza. Cervantes didn’t write this. The major question has been, will the film get international distribution? Distribution is OK and it will be released in many countries very very soon.