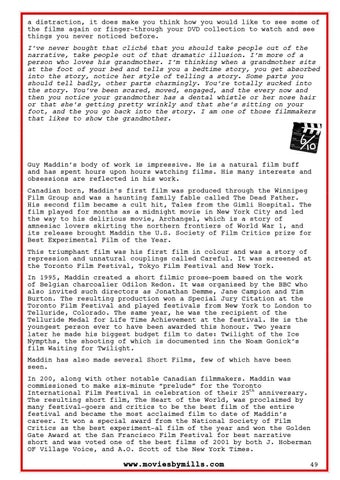 a distraction, it does make you think how you would like to see some of the films again or finger-through your DVD collection to watch and see things you never noticed before. I’ve never bought that cliché that you should take people out of the narrative, take people out of that dramatic illusion. I’m more of a person who loves his grandmother. I’m thinking when a grandmother sits at the foot of your bed and tells you a bedtime story, you get absorbed into the story, notice her style of telling a story. Some parts you should tell badly, other parts charmingly. You’re totally sucked into the story. You’ve been scared, moved, engaged, and the every now and then you notice your grandmother has a dental whistle or her nose hair or that she’s getting pretty wrinkly and that she’s sitting on your foot, and the you go back into the story. I am one of those filmmakers that likes to show the grandmother.

Guy Maddin’s body of work is impressive. He is a natural film buff and has spent hours upon hours watching films. His many interests and obsessions are reflected in his work. Canadian born, Maddin’s first film was produced through the Winnipeg Film Group and was a haunting family fable called The Dead Father. His second film became a cult hit, Tales from the Gimli Hospital. The film played for months as a midnight movie in New York City and led the way to his delirious movie, Archangel, which is a story of amnesiac lovers skirting the northern frontiers of World War 1, and its release brought Maddin the U.S. Society of Film Critics prize for Best Experimental Film of the Year. This triumphant film was his first film in colour and was a story of repression and unnatural couplings called Careful. It was screened at the Toronto Film Festival, Tokyo Film Festival and New York. In 1995, Maddin created a short filmic prose-poem based on the work of Belgian charcoalier Odilon Redon. It was organised by the BBC who also invited such directors as Jonathan Demme, Jane Campion and Tim Burton. The resulting production won a Special Jury Citation at the Toronto Film Festival and played festivals from New York to London to Telluride, Colorado. The same year, he was the recipient of the Telluride Medal for Life Time Achievement at the festival. He is the youngest person ever to have been awarded this honour. Two years later he made his biggest budget film to date: Twilight of the Ice Nympths, the shooting of which is documented inn the Noam Gonick’s film Waiting for Twilight. Maddin has also made several Short Films, few of which have been seen. In 200, along with other notable Canadian filmmakers. Maddin was commissioned to make six-minute “prelude” for the Toronto International Film Festival in celebration of their 25th anniversary. The resulting short film, The Heart of the World, was proclaimed by many festival-goers and critics to be the best film of the entire festival and became the most acclaimed film to date of Maddin’s career. It won a special award from the National Society of Film Critics as the best experiment-al film of the year and won the Golden Gate Award at the San Francisco Film Festival for best narrative short and was voted one of the best films of 2001 by both J. Hoberman OF Village Voice, and A.O. Scott of the New York Times.