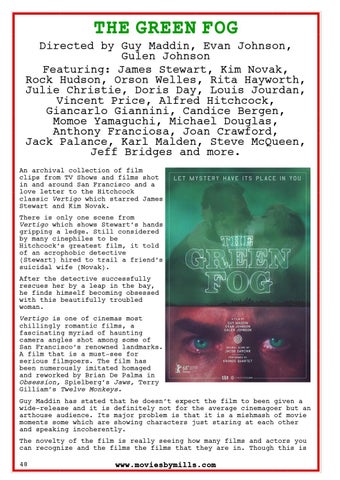 THE GREEN FOG Directed by Guy Maddin, Evan Johnson, Gulen Johnson Featuring: James Stewart, Kim Novak, Rock Hudson, Orson Welles, Rita Hayworth, Julie Christie, Doris Day, Louis Jourdan, Vincent Price, Alfred Hitchcock, Giancarlo Giannini, Candice Bergen, Momoe Yamaguchi, Michael Douglas, Anthony Franciosa, Joan Crawford, Jack Palance, Karl Malden, Steve McQueen, Jeff Bridges and more. An archival collection of film clips from TV Shows and films shot in and around San Francisco and a love letter to the Hitchcock classic Vertigo which starred James Stewart and Kim Novak. There is only one scene from Vertigo which shows Stewart’s hands gripping a ledge. Still considered by many cinephiles to be Hitchcock’s greatest film, it told of an acrophobic detective (Stewart) hired to trail a friend’s suicidal wife (Novak). After the detective successfully rescues her by a leap in the bay, he finds himself becoming obsessed with this beautifully troubled woman. Vertigo is one of cinemas most chillingly romantic films, a fascinating myriad of haunting camera angles shot among some of San Francisco’s renowned landmarks. A film that is a must-see for serious filmgoers. The film has been numerously imitated homaged and reworked by Brian De Palma in Obsession, Spielberg’s Jaws, Terry Gilliam’s Twelve Monkeys. Guy Maddin has stated that he doesn’t expect the film to been given a wide-release and it is definitely not for the average cinemagoer but an arthouse audience. Its major problem is that it is a mishmash of movie moments some which are showing characters just staring at each other and speaking incoherently.

The novelty of the film is really seeing how many films and actors you can recognize and the films the films that they are in. Though this is 48