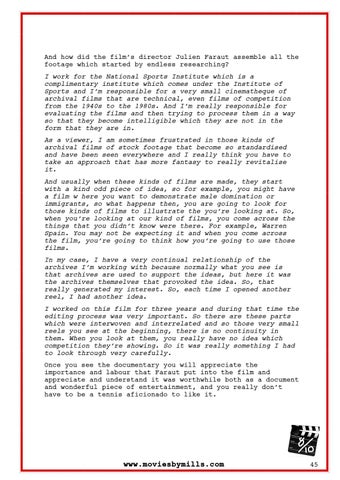 And how did the film’s director Julien Faraut assemble all the footage which started by endless researching? I work for the National Sports Institute which is a complimentary institute which comes under the Institute of Sports and I’m responsible for a very small cinematheque of archival films that are technical, even films of competition from the 1940s to the 1980s. And I’m really responsible for evaluating the films and then trying to process them in a way so that they become intelligible which they are not in the form that they are in.

As a viewer, I am sometimes frustrated in those kinds of archival films of stock footage that become so standardised and have been seen everywhere and I really think you have to take an approach that has more fantasy to really revitalise it. And usually when these kinds of films are made, they start with a kind odd piece of idea, so for example, you might have a film w here you want to demonstrate male domination or immigrants, so what happens then, you are going to look for those kinds of films to illustrate the you’re looking at. So, when you’re looking at our kind of films, you come across the things that you didn’t know were there. For example, Warren Spain. You may not be expecting it and when you come across the film, you’re going to think how you’re going to use those films. In my case, I have a very continual relationship of the archives I’m working with because normally what you see is that archives are used to support the ideas, but here it was the archives themselves that provoked the idea. So, that really generated my interest. So, each time I opened another reel, I had another idea. I worked on this film for three years and during that time the editing process was very important. So there are these parts which were interwoven and interrelated and so those very small reels you see at the beginning, there is no continuity in them. When you look at them, you really have no idea which competition they’re showing. So it was really something I had to look through very carefully. Once you see the documentary you will appreciate the importance and labour that Faraut put into the film and appreciate and understand it was worthwhile both as a document and wonderful piece of entertainment, and you really don’t have to be a tennis aficionado to like it.