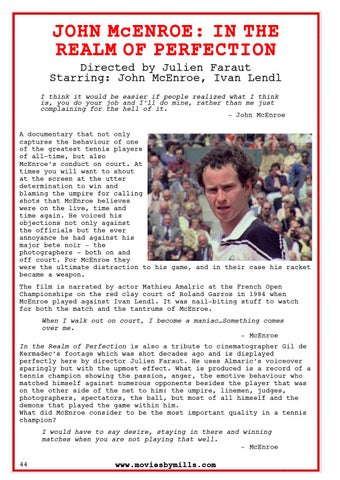 JOHN McENROE: IN THE REALM OF PERFECTION Directed by Julien Faraut Starring: John McEnroe, Ivan Lendl I think it would be easier if people realized what I think is, you do your job and I’ll do mine, rather than me just complaining for the hell of it. - John McEnroe A documentary that not only captures the behaviour of one of the greatest tennis players of all-time, but also McEnroe’s conduct on court. At times you will want to shout at the screen at the utter determination to win and blaming the umpire for calling shots that McEnroe believes were on the live, time and time again. He voiced his objections not only against the officials but the ever annoyance he had against his major bete noir – the photographers – both on and off court. For McEnroe they were the ultimate distraction to his game, and in their case his racket became a weapon. The film is narrated by actor Mathieu Amalric at the French Open Championships on the red clay court of Roland Garros in 1984 when McEnroe played against Ivan Lendl. It was nail-biting stuff to watch for both the match and the tantrums of McEnroe. When I walk out on court, I become a maniac…Something comes over me. - McEnroe In the Realm of Perfection is also a tribute to cinematographer Gil de Kermadec’s footage which was shot decades ago and is displayed perfectly here by director Julien Faraut. He uses Almaric’s voiceover sparingly but with the upmost effect. What is produced is a record of a tennis champion showing the passion, anger, the emotive behaviour who matched himself against numerous opponents besides the player that was on the other side of the net to him: the umpire, linemen, judges, photographers, spectators, the ball, but most of all himself and the demons that played the game within him. What did McEnroe consider to be the most important quality in a tennis champion? I would have to say desire, staying in there and winning matches when you are not playing that well. - McEnroe 44