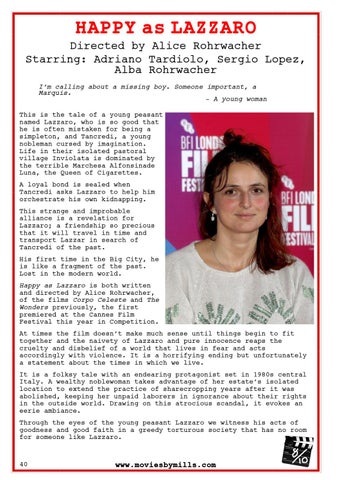 HAPPY as LAZZARO Directed by Alice Rohrwacher Starring: Adriano Tardiolo, Sergio Lopez, Alba Rohrwacher I’m calling about a missing boy. Someone important, a Marquis. - A young woman This is the tale of a young peasant named Lazzaro, who is so good that he is often mistaken for being a simpleton, and Tancredi, a young nobleman cursed by imagination. Life in their isolated pastoral village Inviolata is dominated by the terrible Marchesa Alfonsinade Luna, the Queen of Cigarettes. A loyal bond is sealed when Tancredi asks Lazzaro to help him orchestrate his own kidnapping. This strange and improbable alliance is a revelation for Lazzaro; a friendship so precious that it will travel in time and transport Lazzar in search of Tancredi of the past. His first time in the Big City, he is like a fragment of the past. Lost in the modern world. Happy as Lazzaro is both written and directed by Alice Rohrwacher, of the films Corpo Celeste and The Wonders previously, the first premiered at the Cannes Film Festival this year in Competition. At times the film doesn’t make much sense until things begin to fit together and the naivety of Lazzaro and pure innocence reaps the cruelty and disbelief of a world that lives in fear and acts accordingly with violence. It is a horrifying ending but unfortunately a statement about the times in which we live. It is a folksy tale with an endearing protagonist set in 1980s central Italy. A wealthy noblewoman takes advantage of her estate’s isolated location to extend the practice of sharecropping years after it was abolished, keeping her unpaid laborers in ignorance about their rights in the outside world. Drawing on this atrocious scandal, it evokes an eerie ambiance. Through the eyes of the young peasant Lazzaro we witness his acts of goodness and good faith in a greedy torturous society that has no room for someone like Lazzaro.