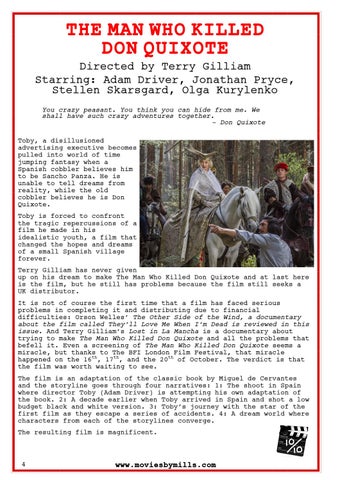 THE MAN WHO KILLED DON QUIXOTE Directed by Terry Gilliam Starring: Adam Driver, Jonathan Pryce, Stellen Skarsgard, Olga Kurylenko You crazy peasant. You think you can hide from me. We shall have such crazy adventures together. - Don Quixote

Toby, a disillusioned advertising executive becomes pulled into world of time jumping fantasy when a Spanish cobbler believes him to be Sancho Panza. He is unable to tell dreams from reality, while the old cobbler believes he is Don Quixote. Toby is forced to confront the tragic repercussions of a film he made in his idealistic youth, a film that changed the hopes and dreams of a small Spanish village forever. Terry Gilliam has never given up on his dream to make The Man Who Killed Don Quixote and at last here is the film, but he still has problems because the film still seeks a UK distributor. It is not of course the first time that a film has faced serious problems in completing it and distributing due to financial difficulties: Orson Welles’ The Other Side of the Wind, a documentary about the film called They’ll Love Me When I’m Dead is reviewed in this issue. And Terry Gilliam’s Lost in La Mancha is a documentary about trying to make The Man Who Killed Don Quixote and all the problems that befell it. Even a screening of The Man Who Killed Don Quixote seems a miracle, but thanks to The BFI London Film Festival, that miracle happened on the 16th, 17th, and the 20th of October. The verdict is that the film was worth waiting to see. The film is an adaptation of the classic book by Miguel de Cervantes and the storyline goes through four narratives: 1: The shoot in Spain where director Toby (Adam Driver) is attempting his own adaptation of the book. 2: A decade earlier when Toby arrived in Spain and shot a low budget black and white version. 3: Toby’s journey with the star of the first film as they escape a series of accidents. 4: A dream world where characters from each of the storylines converge. The resulting film is magnificent.