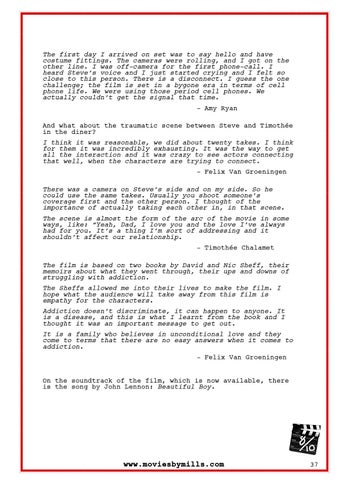 The first day I arrived on set was to say hello and have costume fittings. The cameras were rolling, and I got on the other line. I was off-camera for the first phone-call. I heard Steve’s voice and I just started crying and I felt so close to this person. There is a disconnect. I guess the one challenge; the film is set in a bygone era in terms of cell phone life. We were using those period cell phones. We actually couldn’t get the signal that time. - Amy Ryan And what about the traumatic scene between Steve and Timothée in the diner?

I think it was reasonable, we did about twenty takes. I think for them it was incredibly exhausting. It was the way to get all the interaction and it was crazy to see actors connecting that well, when the characters are trying to connect. - Felix Van Groeningen There was a camera on Steve’s side and on my side. So he could use the same takes. Usually you shoot someone’s coverage first and the other person. I thought of the importance of actually taking each other in, in that scene. The scene is almost the form of the arc of the movie in some ways, like: “Yeah, Dad, I love you and the love I’ve always had for you. It’s a thing I’m sort of addressing and it shouldn’t affect our relationship. - Timothée Chalamet The film is based on two books by David and Nic Sheff, their memoirs about what they went through, their ups and downs of struggling with addiction. The Sheffs allowed me into their lives to make the film. I hope what the audience will take away from this film is empathy for the characters. Addiction doesn’t discriminate, it can happen to anyone. It is a disease, and this is what I learnt from the book and I thought it was an important message to get out. It is a family who believes in unconditional love and they come to terms that there are no easy answers when it comes to addiction. - Felix Van Groeningen On the soundtrack of the film, which is now available, there is the song by John Lennon: Beautiful Boy.