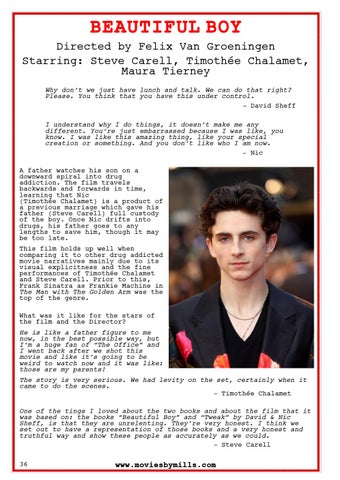 BEAUTIFUL BOY Directed by Felix Van Groeningen Starring: Steve Carell, Timothée Chalamet, Maura Tierney Why don’t we just have lunch and talk. We can do that right? Please. You think that you have this under control. - David Sheff I understand why I do things, it doesn’t make me any different. You’re just embarrassed because I was like, you know. I was like this amazing thing, like your special creation or something. And you don’t like who I am now. - Nic A father watches his son on a downward spiral into drug addiction. The film travels backwards and forwards in time, learning that Nic (Timothée Chalamet) is a product of a previous marriage which gave his father (Steve Carell) full custody of the boy. Once Nic drifts into drugs, his father goes to any lengths to save him, though it may be too late. This film holds up well when comparing it to other drug addicted movie narratives mainly due to its visual explicitness and the fine performances of Timothée Chalamet and Steve Carell. Prior to this, Frank Sinatra as Frankie Machine in The Man with The Golden Arm was the top of the genre. What was it like for the stars of the film and the Director? He is like a father figure to me now, in the best possible way, but I’m a huge fan of “The Office” and I went back after we shot this movie and like it’s going to be weird to watch now and it was like: those are my parents! The story is very serious. We had levity on the set, certainly when it came to do the scenes. - Timothée Chalamet One of the tings I loved about the two books and about the film that it was based on: the books “Beautiful Boy” and “Tweak” by David &amp; Nic Sheff, is that they are unrelenting. They’re very honest. I think we set out to have a representation of those books and a very honest and truthful way and show these people as accurately as we could. - Steve Carell 36