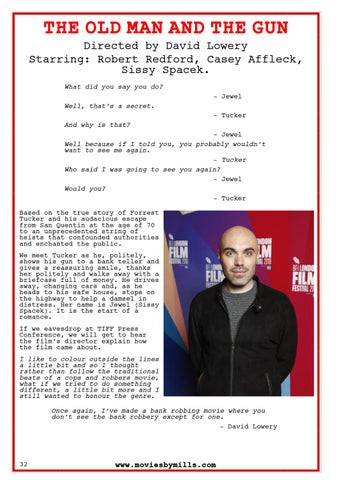 THE OLD MAN AND THE GUN Directed by David Lowery Starring: Robert Redford, Casey Affleck, Sissy Spacek. What did you say you do? - Jewel Well, that’s a secret. - Tucker And why is that? - Jewel Well because if I told you, you probably wouldn’t want to see me again. - Tucker Who said I was going to see you again? - Jewel Would you? - Tucker Based on the true story of Forrest Tucker and his audacious escape from San Quentin at the age of 70 to an unprecedented string of heists that confounded authorities and enchanted the public. We meet Tucker as he, politely, shows his gun to a bank teller and gives a reassuring smile, thanks her politely and walks away with a briefcase full of money. He drives away, changing cars and, as he heads to his safe house, stops on the highway to help a damsel in distress. Her name is Jewel (Sissy Spacek). It is the start of a romance. If we eavesdrop at TIFF Press Conference, we will get to hear the film’s director explain how the film came about. I like to colour outside the lines a little bit and so I thought rather than follow the traditional beats of a cops and robbers movie, what if we tried to do something different, a little bit more and I still wanted to honour the genre. Once again, I’ve made a bank robbing movie where you don’t see the bank robbery except for one. - David Lowery