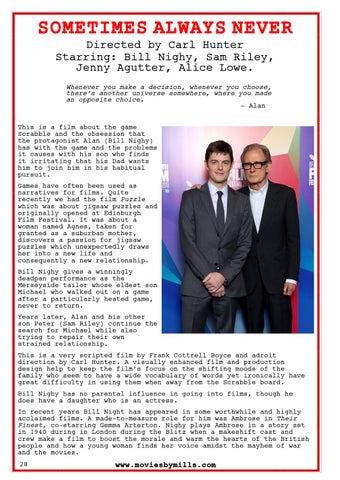 SOMETIMES ALWAYS NEVER Directed by Carl Hunter Starring: Bill Nighy, Sam Riley, Jenny Agutter, Alice Lowe. Whenever you make a decision, whenever you choose, thereâ&amp;#x20AC;&amp;#x2122;s another universe somewhere, where you made an opposite choice. - Alan This is a film about the game Scrabble and the obsession that the protagonist Alan (Bill Nighy) has with the game and the problems it causes with his son who finds it irritating that his Dad wants him to join him in his habitual pursuit. Games have often been used as narratives for films. Quite recently we had the film Puzzle which was about jigsaw puzzles and originally opened at Edinburgh Film Festival. It was about a woman named Agnes, taken for granted as a suburban mother, discovers a passion for jigsaw puzzles which unexpectedly draws her into a new life and consequently a new relationship. Bill Nighy gives a winningly deadpan performance as the Merseyside tailor whose eldest son Michael who walked out on a game after a particularly heated game, never to return. Years later, Alan and his other son Peter (Sam Riley) continue the search for Michael while also trying to repair their own strained relationship. This is a very scripted film by Frank Cottrell Boyce and adroit direction by Carl Hunter. A visually enhanced film and production design help to keep the filmâ&amp;#x20AC;&amp;#x2122;s focus on the shifting moods of the family who seem to have a wide vocabulary of words yet ironically have great difficulty in using them when away from the Scrabble board. Bill Nighy has no parental influence in going into films, though he does have a daughter who is an actress. In recent years Bill Night has appeared in some worthwhile and highly acclaimed films. A made-to-measure role for him was Ambrose in Their Finest, co-starring Gemma Arterton. Nighy plays Ambrose in a story set in 1940 during in London during the Blitz when a makeshift cast and crew make a film to boost the morale and warm the hearts of the British people and how a young woman finds her voice amidst the mayhem of war and the movies. 28