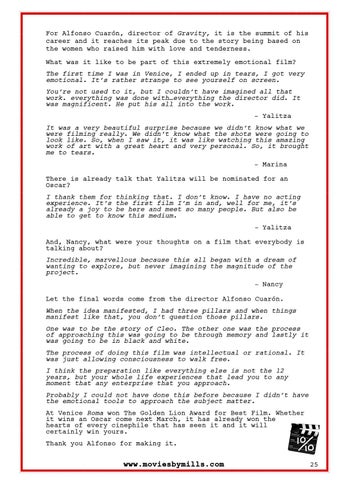 For Alfonso Cuarón, director of Gravity, it is the summit of his career and it reaches its peak due to the story being based on the women who raised him with love and tenderness. What was it like to be part of this extremely emotional film? The first time I was in Venice, I ended up in tears, I got very emotional. It’s rather strange to see yourself on screen. You’re not used to it, but I couldn’t have imagined all that work. everything was done with…everything the director did. It was magnificent. He put his all into the work. - Yalitza It was a very beautiful surprise because we didn’t know what we were filming really. We didn’t know what the shots were going to look like. So, when I saw it, it was like watching this amazing work of art with a great heart and very personal. So, it brought me to tears. - Marina There is already talk that Yalitza will be nominated for an Oscar? I thank them for thinking that. I don’t know. I have no acting experience. It’s the first film I’m in and, well for me, it’s already a joy to be here and meet so many people. But also be able to get to know this medium. - Yalitza

And, Nancy, what were your thoughts on a film that everybody is talking about? Incredible, marvellous because this all began with a dream of wanting to explore, but never imagining the magnitude of the project. - Nancy Let the final words come from the director Alfonso Cuarón. When the idea manifested, I had three pillars and when things manifest like that, you don’t question those pillars. One was to be the story of Cleo. The other one was the process of approaching this was going to be through memory and lastly it was going to be in black and white. The process of doing this film was intellectual or rational. It was just allowing consciousness to walk free. I think the preparation like everything else is not the 12 years, but your whole life experiences that lead you to any moment that any enterprise that you approach. Probably I could not have done this before because I didn’t have the emotional tools to approach the subject matter. At Venice Roma won The Golden Lion Award for Best Film. Whether it wins an Oscar come next March, it has already won the hearts of every cinephile that has seen it and it will certainly win yours. Thank you Alfonso for making it.