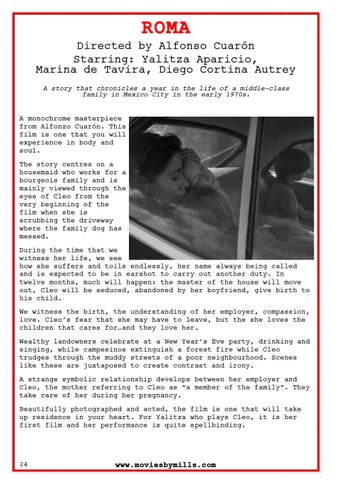 ROMA Directed by Alfonso Cuarón Starring: Yalitza Aparicio, Marina de Tavira, Diego Cortina Autrey A story that chronicles a year in the life of a middle-class family in Mexico City in the early 1970s.

A monochrome masterpiece from Alfonzo Cuarón. This film is one that you will experience in body and soul. The story centres on a housemaid who works for a bourgeois family and is mainly viewed through the eyes of Cleo from the very beginning of the film when she is scrubbing the driveway where the family dog has messed. During the time that we witness her life, we see how she suffers and toils endlessly, her name always being called and is expected to be in earshot to carry out another duty. In twelve months, much will happen: the master of the house will move out, Cleo will be seduced, abandoned by her boyfriend, give birth to his child. We witness the birth, the understanding of her employer, compassion, love. Cleo’s fear that she may have to leave, but the she loves the children that cares for…and they love her.

Wealthy landowners celebrate at a New Year’s Eve party, drinking and singing, while campesinos extinguish a forest fire while Cleo trudges through the muddy streets of a poor neighbourhood. Scenes like these are juxtaposed to create contrast and irony. A strange symbolic relationship develops between her employer and Cleo, the mother referring to Cleo as “a member of the family”. They take care of her during her pregnancy. Beautifully photographed and acted, the film is one that will take up residence in your heart. For Yalitza who plays Cleo, it is her first film and her performance is quite spellbinding.