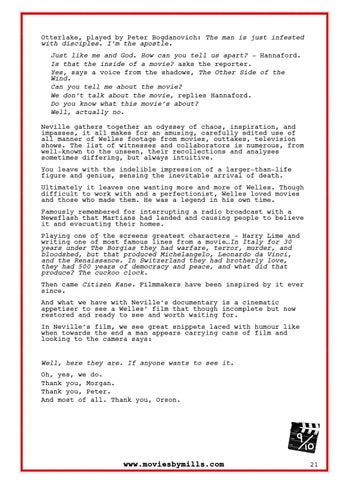 Otterlake, played by Peter Bogdanovich: The man is just infested with disciples. I’m the apostle. Just like me and God. How can you tell us apart? – Hannaford. Is that the inside of a movie? asks the reporter. Yes, says a voice from the shadows, The Other Side of the Wind. Can you tell me about the movie? We don’t talk about the movie, replies Hannaford. Do you know what this movie’s about? Well, actually no. Neville gathers together an odyssey of chaos, inspiration, and impasses, it all makes for an amusing, carefully edited use of all manner of Welles footage from movies, outtakes, television shows. The list of witnesses and collaborators is numerous, from well-known to the unseen, their recollections and analyses sometimes differing, but always intuitive. You leave with the indelible impression of a larger-than-life figure and genius, sensing the inevitable arrival of death. Ultimately it leaves one wanting more and more of Welles. Though difficult to work with and a perfectionist, Welles loved movies and those who made them. He was a legend in his own time. Famously remembered for interrupting a radio broadcast with a Newsflash that Martians had landed and causing people to believe it and evacuating their homes. Playing one of the screens greatest characters – Harry Lime and writing one of most famous lines from a movie…In Italy for 30 years under The Borgias they had warfare, terror, murder, and bloodshed, but that produced Michelangelo, Leonardo da Vinci, and the Renaissance. In Switzerland they had brotherly love, they had 500 years of democracy and peace, and what did that produce? The cuckoo clock. Then came Citizen Kane. Filmmakers have been inspired by it ever since. And what we have with Neville’s documentary is a cinematic appetiser to see a Welles’ film that though incomplete but now restored and ready to see and worth waiting for. In Neville’s film, we see great snippets laced with humour like when towards the end a man appears carrying cans of film and looking to the camera says:

Well, here they are. If anyone wants to see it. Oh, yes, we do. Thank you, Morgan. Thank you, Peter. And most of all. Thank you, Orson.