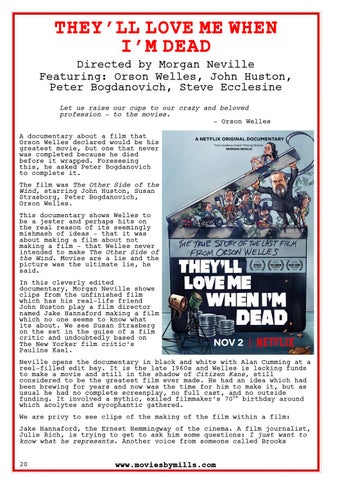 THEY’LL LOVE ME WHEN I’M DEAD Directed by Morgan Neville Featuring: Orson Welles, John Huston, Peter Bogdanovich, Steve Ecclesine Let us raise our cups to our crazy and beloved profession – to the movies. - Orson Welles A documentary about a film that Orson Welles declared would be his greatest movie, but one that never was completed because he died before it wrapped. Foreseeing this, he asked Peter Bogdanovich to complete it. The film was The Other Side of the Wind, starring John Huston, Susan Strasborg, Peter Bogdanovich, Orson Welles. This documentary shows Welles to be a jester and perhaps hits on the real reason of its seemingly mishmash of ideas – that it was about making a film about not making a film – that Welles never intended to make The Other Side of the Wind. Movies are a lie and the picture was the ultimate lie, he said. In this cleverly edited documentary, Morgan Neville shows clips from the unfinished film which has his real-life friend John Huston play a film director named Jake Hannaford making a film which no one seems to know what its about. We see Susan Strasberg on the set in the guise of a film critic and undoubtedly based on The New Yorker film critic’s Pauline Kael. Neville opens the documentary in black and white with Alan Cumming at a reel-filled edit bay. It is the late 1960s and Welles is lacking funds to make a movie and still in the shadow of Citizen Kane, still considered to be the greatest film ever made. He had an idea which had been brewing for years and now was the time for him to make it, but as usual he had no complete screenplay, no full cast, and no outside funding. It involved a mythic, exiled filmmaker’s 70th birthday around which acolytes and sycophantic gathered. We are privy to see clips of the making of the film within a film: Jake Hannaford, the Ernest Hemmingway of the cinema. A film journalist, Julie Rich, is trying to get to ask him some questions: I just want to know what he represents. Another voice from someone called Brooks 20