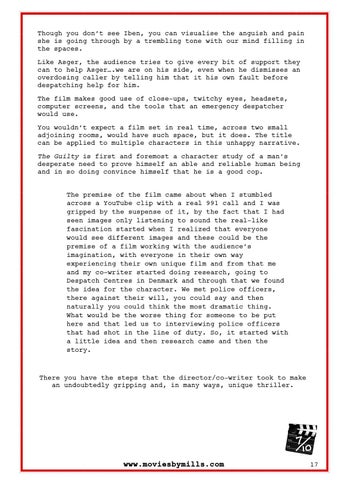 Though you don’t see Iben, you can visualise the anguish and pain she is going through by a trembling tone with our mind filling in the spaces. Like Asger, the audience tries to give every bit of support they can to help Asger….we are on his side, even when he dismisses an overdosing caller by telling him that it his own fault before despatching help for him. The film makes good use of close-ups, twitchy eyes, headsets, computer screens, and the tools that an emergency despatcher would use. You wouldn’t expect a film set in real time, across two small adjoining rooms, would have such space, but it does. The title can be applied to multiple characters in this unhappy narrative. The Guilty is first and foremost a character study of a man’s desperate need to prove himself an able and reliable human being and in so doing convince himself that he is a good cop. The premise of the film came about when I stumbled across a YouTube clip with a real 991 call and I was gripped by the suspense of it, by the fact that I had seen images only listening to sound the real-like fascination started when I realized that everyone would see different images and these could be the premise of a film working with the audience’s imagination, with everyone in their own way experiencing their own unique film and from that me and my co-writer started doing research, going to Despatch Centres in Denmark and through that we found the idea for the character. We met police officers, there against their will, you could say and then naturally you could think the most dramatic thing. What would be the worse thing for someone to be put here and that led us to interviewing police officers that had shot in the line of duty. So, it started with a little idea and then research came and then the story.

There you have the steps that the director/co-writer took to make an undoubtedly gripping and, in many ways, unique thriller.