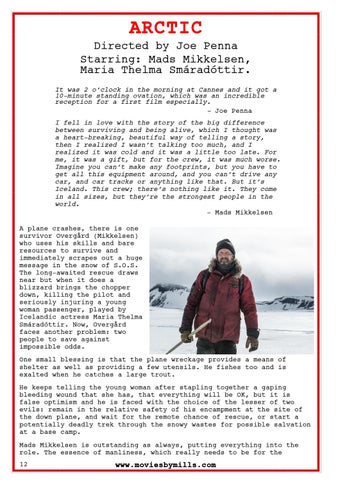 ARCTIC Directed by Joe Penna Starring: Mads Mikkelsen, Maria Thelma Smáradóttir. It was 2 o’clock in the morning at Cannes and it got a 10-minute standing ovation, which was an incredible reception for a first film especially. - Joe Penna I fell in love with the story of the big difference between surviving and being alive, which I thought was a heart-breaking, beautiful way of telling a story, then I realized I wasn’t talking too much, and I realized it was cold and it was a little too late. For me, it was a gift, but for the crew, it was much worse. Imagine you can’t make any footprints, but you have to get all this equipment around, and you can’t drive any car, and car tracks or anything like that. But it’s Iceland. This crew; there’s nothing like it. They come in all sizes, but they’re the strongest people in the world. - Mads Mikkelsen A plane crashes, there is one survivor Overgård (Mikkelsen) who uses his skills and bare resources to survive and immediately scrapes out a huge message in the snow of S.O.S. The long-awaited rescue draws near but when it does a blizzard brings the chopper down, killing the pilot and seriously injuring a young woman passenger, played by Icelandic actress Maria Thelma Smáradóttir. Now, Overgård faces another problem: two people to save against impossible odds. One small blessing is that the plane wreckage provides a means of shelter as well as providing a few utensils. He fishes too and is exalted when he catches a large trout. He keeps telling the young woman after stapling together a gaping bleeding wound that she has, that everything will be OK, but it is false optimism and he is faced with the choice of the lesser of two evils: remain in the relative safety of his encampment at the site of the down plane, and wait for the remote chance of rescue, or start a potentially deadly trek through the snowy wastes for possible salvation at a base camp. Mads Mikkelsen is outstanding as always, putting everything into the role. The essence of manliness, which really needs to be for the 12