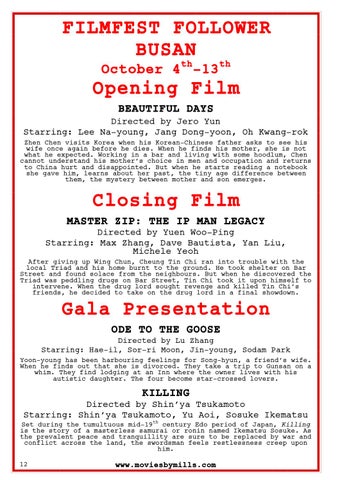 Opening Film BEAUTIFUL DAYS Directed by Jero Yun Starring: Lee Na-young, Jang Dong-yoon, Oh Kwang-rok Zhen Chen visits Korea when his Korean-Chinese father asks to see his wife once again before he dies. When he finds his mother, she is not what he expected. Working in a bar and living with some hoodlum, Chen cannot understand his mother’s choice in men and occupation and returns to China hurt and disappointed. But when he starts reading a notebook she gave him, learns about her past, the tiny age difference between them, the mystery between mother and son emerges.

Closing Film MASTER ZIP: THE IP MAN LEGACY Directed by Yuen Woo-Ping Starring: Max Zhang, Dave Bautista, Yan Liu, Michele Yeoh After giving up Wing Chun, Cheung Tin Chi ran into trouble with the local Triad and his home burnt to the ground. He took shelter on Bar Street and found solace from the neighbours. But when he discovered the Triad was peddling drugs on Bar Street, Tin Chi took it upon himself to intervene. When the drug lord sought revenge and killed Tin Chi’s friends, he decided to take on the drug lord in a final showdown.

Gala Presentation ODE TO THE GOOSE Directed by Lu Zhang Starring: Hae-il, Sor-ri Moon, Jin-young, Sodam Park Yoon-young has been harbouring feelings for Song-hyun, a friend’s wife. When he finds out that she is divorced. They take a trip to Gunsan on a whim. They find lodging at an Inn where the owner lives with his autistic daughter. The four become star-crossed lovers.

KILLING Directed by Shin’ya Tsukamoto Starring: Shin’ya Tsukamoto, Yu Aoi, Sosuke Ikematsu Set during the tumultuous mid-19th century Edo period of Japan, Killing is the story of a masterless samurai or ronin named Ikematsu Sosuke. As the prevalent peace and tranquillity are sure to be replaced by war and conflict across the land, the swordsman feels restlessness creep upon him. 12