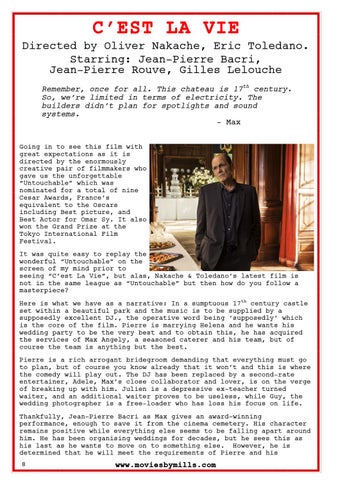 C’EST LA VIE Directed by Oliver Nakache, Eric Toledano. Starring: Jean-Pierre Bacri, Jean-Pierre Rouve, Gilles Lelouche Remember, once for all. This chateau is 17th century. So, we’re limited in terms of electricity. The builders didn’t plan for spotlights and sound systems. - Max Going in to see this film with great expectations as it is directed by the enormously creative pair of filmmakers who gave us the unforgettable “Untouchable” which was nominated for a total of nine Cesar Awards, France’s equivalent to the Oscars including Best picture, and Best Actor for Omar Sy. It also won the Grand Prize at the Tokyo International Film Festival. It was quite easy to replay the wonderful “Untouchable” on the screen of my mind prior to seeing “C’est La Vie”, but alas, Nakache & Toledano’s latest film is not in the same league as “Untouchable” but then how do you follow a masterpiece? Here is what we have as a narrative: In a sumptuous 17th century castle set within a beautiful park and the music is to be supplied by a supposedly excellent DJ., the operative word being ‘supposedly’ which is the core of the film. Pierre is marrying Helena and he wants his wedding party to be the very best and to obtain this, he has acquired the services of Max Angely, a seasoned caterer and his team, but of course the team is anything but the best. Pierre is a rich arrogant bridegroom demanding that everything must go to plan, but of course you know already that it won’t and this is where the comedy will play out. The DJ has been replaced by a second-rate entertainer, Adele, Max’s close collaborator and lover, is on the verge of breaking up with him. Julien is a depressive ex-teacher turned waiter, and an additional waiter proves to be useless, while Guy, the wedding photographer is a free-loader who has loss his focus on life. Thankfully, Jean-Pierre Bacri as Max gives an award-winning performance, enough to save it from the cinema cemetery. His character remains positive while everything else seems to be falling apart around him. He has been organising weddings for decades, but he sees this as his last as he wants to move on to something else. However, he is determined that he will meet the requirements of Pierre and his 8