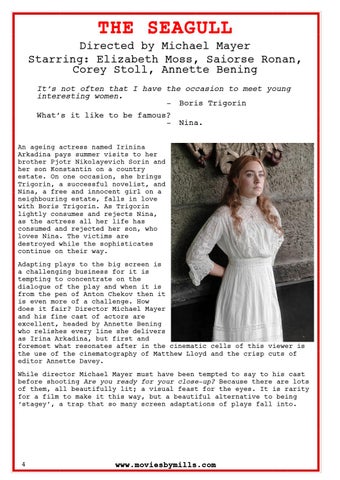 THE SEAGULL Directed by Michael Mayer Starring: Elizabeth Moss, Saiorse Ronan, Corey Stoll, Annette Bening It’s not often that I have the occasion to meet young interesting women. - Boris Trigorin What’s it like to be famous? -

An ageing actress named Irinina Arkadina pays summer visits to her brother Pjotr Nikolayevich Sorin and her son Konstantin on a country estate. On one occasion, she brings Trigorin, a successful novelist, and Nina, a free and innocent girl on a neighbouring estate, falls in love with Boris Trigorin. As Trigorin lightly consumes and rejects Nina, as the actress all her life has consumed and rejected her son, who loves Nina. The victims are destroyed while the sophisticates continue on their way. Adapting plays to the big screen is a challenging business for it is tempting to concentrate on the dialogue of the play and when it is from the pen of Anton Chekov then it is even more of a challenge. How does it fair? Director Michael Mayer and his fine cast of actors are excellent, headed by Annette Bening who relishes every line she delivers as Irina Arkadina, but first and foremost what resonates after in the cinematic cells of this viewer is the use of the cinematography of Matthew Lloyd and the crisp cuts of editor Annette Davey. While director Michael Mayer must have been tempted to say to his cast before shooting Are you ready for your close-up? Because there are lots of them, all beautifully lit; a visual feast for the eyes. It is rarity for a film to make it this way, but a beautiful alternative to being ‘stagey’, a trap that so many screen adaptations of plays fall into.