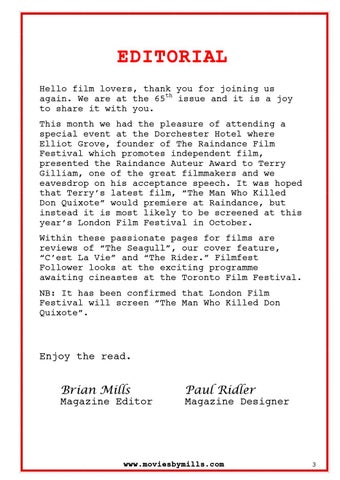 EDITORIAL Hello film lovers, thank you for joining us again. We are at the 65th issue and it is a joy to share it with you. This month we had the pleasure of attending a special event at the Dorchester Hotel where Elliot Grove, founder of The Raindance Film Festival which promotes independent film, presented the Raindance Auteur Award to Terry Gilliam, one of the great filmmakers and we eavesdrop on his acceptance speech. It was hoped that Terry’s latest film, “The Man Who Killed Don Quixote” would premiere at Raindance, but instead it is most likely to be screened at this year’s London Film Festival in October.

Within these passionate pages for films are reviews of “The Seagull”, our cover feature, “C’est La Vie” and “The Rider.” Filmfest Follower looks at the exciting programme awaiting cineastes at the Toronto Film Festival. NB: It has been confirmed that London Film Festival will screen “The Man Who Killed Don Quixote”.