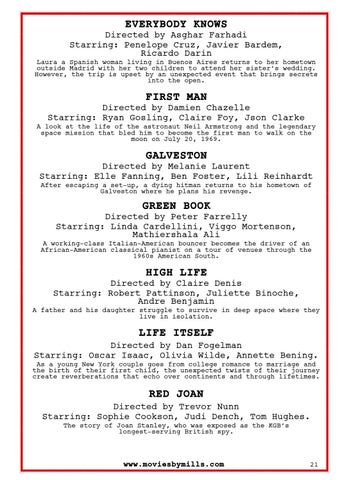 EVERYBODY KNOWS Directed by Asghar Farhadi Starring: Penelope Cruz, Javier Bardem, Ricardo Darin Laura a Spanish woman living in Buenos Aires returns to her hometown outside Madrid with her two children to attend her sisterâ&#x20AC;&#x2122;s wedding. However, the trip is upset by an unexpected event that brings secrets into the open.

FIRST MAN Directed by Damien Chazelle Starring: Ryan Gosling, Claire Foy, Json Clarke A look at the life of the astronaut Neil Armstrong and the legendary space mission that bled him to become the first man to walk on the moon on July 20, 1969.

GALVESTON Directed by Melanie Laurent Starring: Elle Fanning, Ben Foster, Lili Reinhardt After escaping a set-up, a dying hitman returns to his hometown of Galveston where he plans his revenge.

HIGH LIFE Directed by Claire Denis Starring: Robert Pattinson, Juliette Binoche, Andre Benjamin A father and his daughter struggle to survive in deep space where they live in isolation.

LIFE ITSELF Directed by Dan Fogelman Starring: Oscar Isaac, Olivia Wilde, Annette Bening. As a young New York couple goes from college romance to marriage and the birth of their first child, the unexpected twists of their journey create reverberations that echo over continents and through lifetimes.