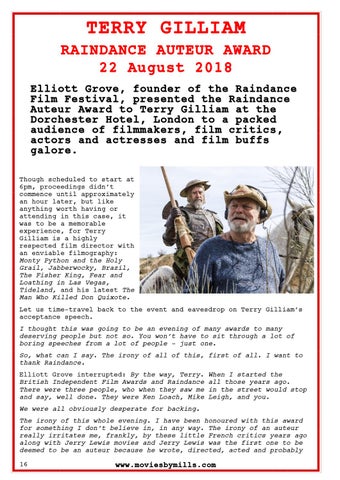 TERRY GILLIAM RAINDANCE AUTEUR AWARD 22 August 2018 Elliott Grove, founder of the Raindance Film Festival, presented the Raindance Auteur Award to Terry Gilliam at the Dorchester Hotel, London to a packed audience of filmmakers, film critics, actors and actresses and film buffs galore. Though scheduled to start at 6pm, proceedings didn’t commence until approximately an hour later, but like anything worth having or attending in this case, it was to be a memorable experience, for Terry Gilliam is a highly respected film director with an enviable filmography: Monty Python and the Holy Grail, Jabberwocky, Brazil, The Fisher King, Fear and Loathing in Las Vegas, Tideland, and his latest The Man Who Killed Don Quixote. Let us time-travel back to the event and eavesdrop on Terry Gilliam’s acceptance speech. I thought this was going to be an evening of many awards to many deserving people but not so. You won’t have to sit through a lot of boring speeches from a lot of people – just one. So, what can I say. The irony of all of this, first of all. I want to thank Raindance. Elliott Grove interrupted: By the way, Terry. British Independent Film Awards and Raindance There were three people, who when they saw me and say, well done. They were Ken Loach, Mike

When I started the all those years ago. in the street would stop Leigh, and you.

We were all obviously desperate for backing. The irony of this whole evening. I have been honoured with this award for something I don’t believe in, in any way. The irony of an auteur really irritates me, frankly, by these little French critics years ago along with Jerry Lewis movies and Jerry Lewis was the first one to be deemed to be an auteur because he wrote, directed, acted and probably 16