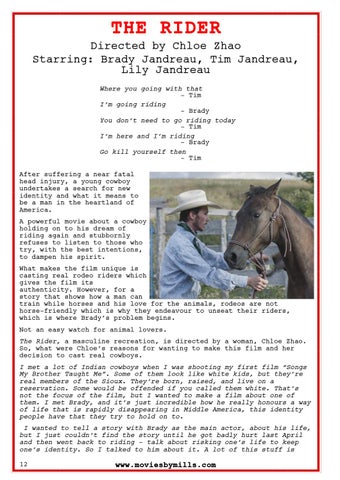 THE RIDER Directed by Chloe Zhao Starring: Brady Jandreau, Tim Jandreau, Lily Jandreau Where you going with that - Tim I’m going riding - Brady You don’t need to go riding today - Tim I’m here and I’m riding - Brady Go kill yourself then - Tim After suffering a near fatal head injury, a young cowboy undertakes a search for new identity and what it means to be a man in the heartland of America. A powerful movie about a cowboy holding on to his dream of riding again and stubbornly refuses to listen to those who try, with the best intentions, to dampen his spirit. What makes the film unique is casting real rodeo riders which gives the film its authenticity. However, for a story that shows how a man can train while horses and his love for the animals, rodeos are not horse-friendly which is why they endeavour to unseat their riders, which is where Brady’s problem begins. Not an easy watch for animal lovers.

The Rider, a masculine recreation, is directed by a woman, Chloe Zhao. So, what were Chloe’s reasons for wanting to make this film and her decision to cast real cowboys. I met a lot of Indian cowboys when I was shooting my first film “Songs My Brother Taught Me”. Some of them look like white kids, but they’re real members of the Sioux. They’re born, raised, and live on a reservation. Some would be offended if you called them white. That’s not the focus of the film, but I wanted to make a film about one of them. I met Brady, and it’s just incredible how he really honours a way of life that is rapidly disappearing in Middle America, this identity people have that they try to hold on to. I wanted to tell a story with Brady as the main actor, about his life, but I just couldn’t find the story until he got badly hurt last April and then went back to riding – talk about risking one’s life to keep one’s identity. So I talked to him about it. A lot of this stuff is 12